Sarah Burton Is Announced As The Fashion Awards’ Trailblazer

Alexander McQueen creative director Sarah Burton will be honoured as an industry trailblazer at the Fashion Awards on 2nd December. The special-recognition accolade, which saw Kim Jones as its inaugural recipient in 2018, celebrates the game-changers driving fashion forward through groundbreaking innovations and unparalleled craftsmanship. Burton couldn’t be a more fitting recipient.

Known for her limitless imagination, affinity with nature and excellent resourcefulness, Burton is one of fashion’s workhorses, who come alive in the studio but shy away from publicity. After joining the house as a Central Saint Martins student on work placement in 1996 and succeeding Lee McQueen at the helm in 2010, Burton’s name was catapulted into the mainstream in 2011 when Kate Middleton became the Duchess of Cambridge wearing a custom Alexander McQueen gown.

“What everyone always wants to ask about are the three things I won’t talk about: the wedding dress, Lee and my family,” Burton told Sarah Mower in the September 2018 issue of British Vogue. “But I always say, it’s so amazing to be able to go to work every day and love what you do, and I personally want that to be how I’m judged. The work – that’s the narrative, not what I do on the weekend.” 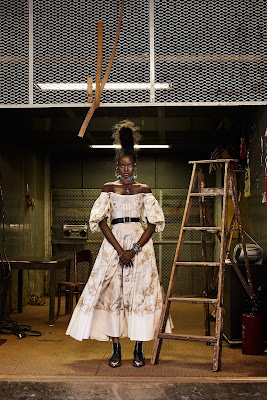 2019 has marked a significant chapter in Burton’s McQueen story. The ribbon was cut on 27 Old Bond Street, the first flagship under her direction, which is more experiential retail concept than boutique. The top floor of the Smiljan Radic-designed space houses an archive and exhibition area devoted entirely to the creative process of McQueen garments past and present. The reticent Burton has been known to give talks to inspire and foster young talent, but there’s plenty more to keep customers returning, including a refreshment of the sumptuous interiors that reflect Burton’s obsession with exquisite fabrication. Her immersive research trips are industry-renowned, and have recently included a team venture to the West Country to research prehistoric standing stones, ley lines and lore, and the North of England to consult fabric mills specialising Mallon linen and Irish beetling. “I have to touch everything, even the commercial things,” Burton told Mower of her forensic eye for detail. “If you don’t touch it, I don't think it feels authentic.”

“Sarah’s empowering and narrative approach to shows and her focus on community and appreciation of craft, technology and English heritage is what has made her one of the most respected designers of our time,” Caroline Rush, BFC chief executive, said of Burton’s Trailblazer Award. “Her commitment to sharing her vision and expertise with the future generations of fashion designers has been remarkable. She’s an incredible source of inspiration for many generations to come.”

With worldwide plans for stores and events in the pipeline, this industry recognition will bolster Burton’s status as a star designer to whom parent group Kering is paying increased financial attention to. Watch this space, Burton’s couture-like vision is only going to get bigger and better.

Posted by FASHIONmode News at 8:34 AM