This Turkish Designer Takes Game Of Thrones Style To The Street

The Istanbul-based Koral Sagular has a regal look, almost as if he was plucked out of some medieval painting. In fact, the strikingly handsome 24-year-old looks like a carbon copy of the portrait of Don Juan de Austria by Juan Pantoja de la Cruz, a painting that dates back to the second-half of the 16th century. It’s an image that Sagular has posted on Instagram. His caption for it reads, “Would swipe right,” a cheeky reference to 21st-century dating apps. Also on his Instagram are photographs of the Turkish designer himself, posing in baroque garb while wearing ornate breastplates, which he decorates with very modern—and often erotic—imagery. One incarnation is affixed with O-rings, miniature clay faces and crawfish, and embellished with chandelier crystals, all of which are found at secondhand stores in Istanbul. In another image, he wears a breastplate embellished with what looks like a prayer candle with the bust of Amy Winehouse at the throat. So far, Sagular counts Violet Chachki as a fan. 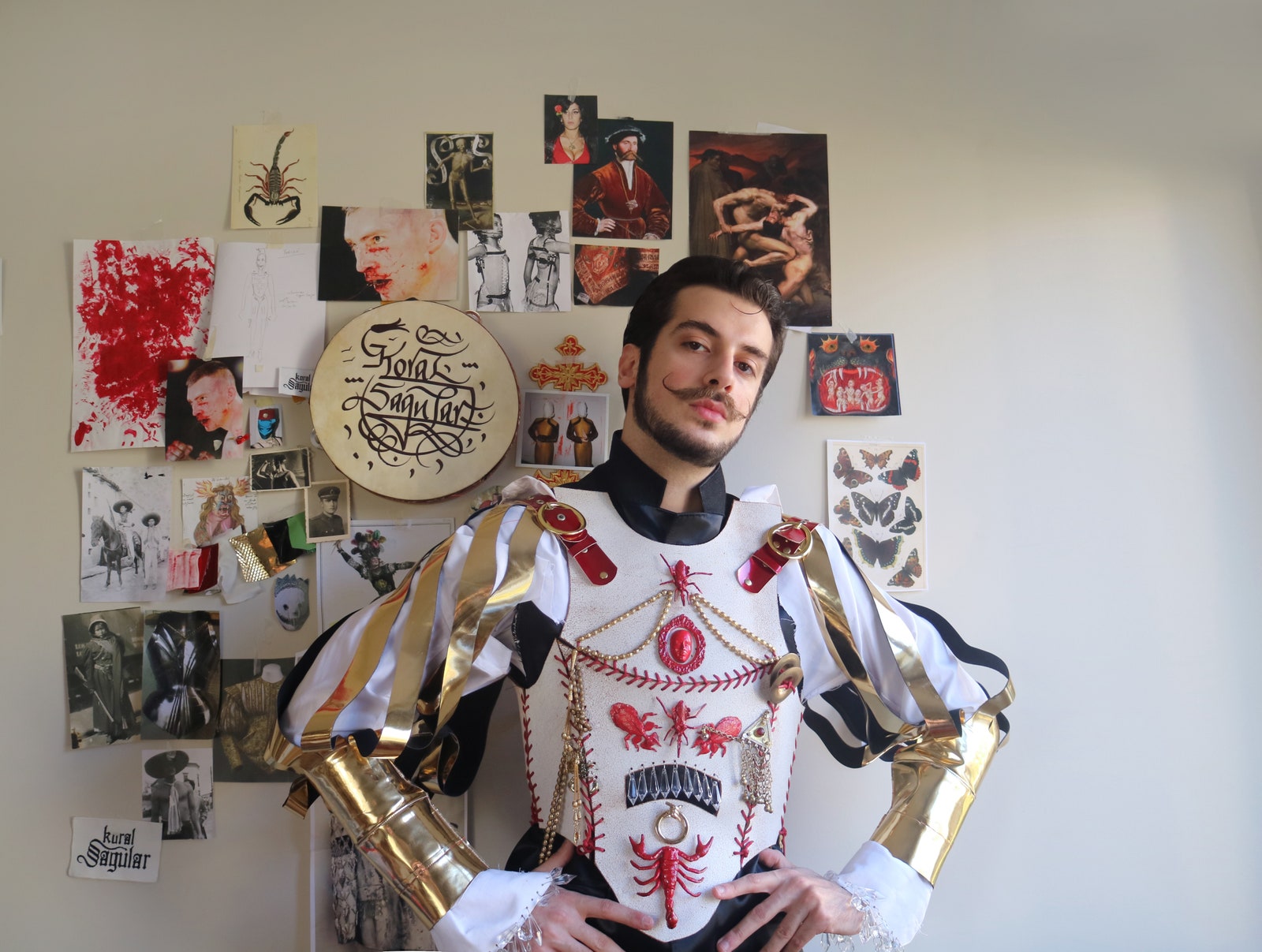 Sagular was exposed to art history from a young age, thanks to his mother who was a painter and an antiques collector. “I remember working with her in the atelier and listening to Henry Purcell and Bach for hours,” he says. “I think my baroque obsession comes from there.” He also reminisces about his grandfather, who served as a brigadier in the Turkish army and became a large inspiration for Sagular’s armor. “He always enjoyed telling me his military memories and showing me his old uniforms and medallions.” (The mood board for his spring 2020 collection includes two vintage photos of his grandfather in uniform.) Eventually, for a project at his fine arts high school, Sagular started creating armor using recycled materials. While many other designers find muses, Sagular models everything himself. “I’m the one who makes them and knows all the stories behind them. Because of this, I think I can get into the right mood in the shoots,” he says. His poses are often dramatic, and he takes inspiration from the twisted, limb-jutting drawings of Egon Schiele. 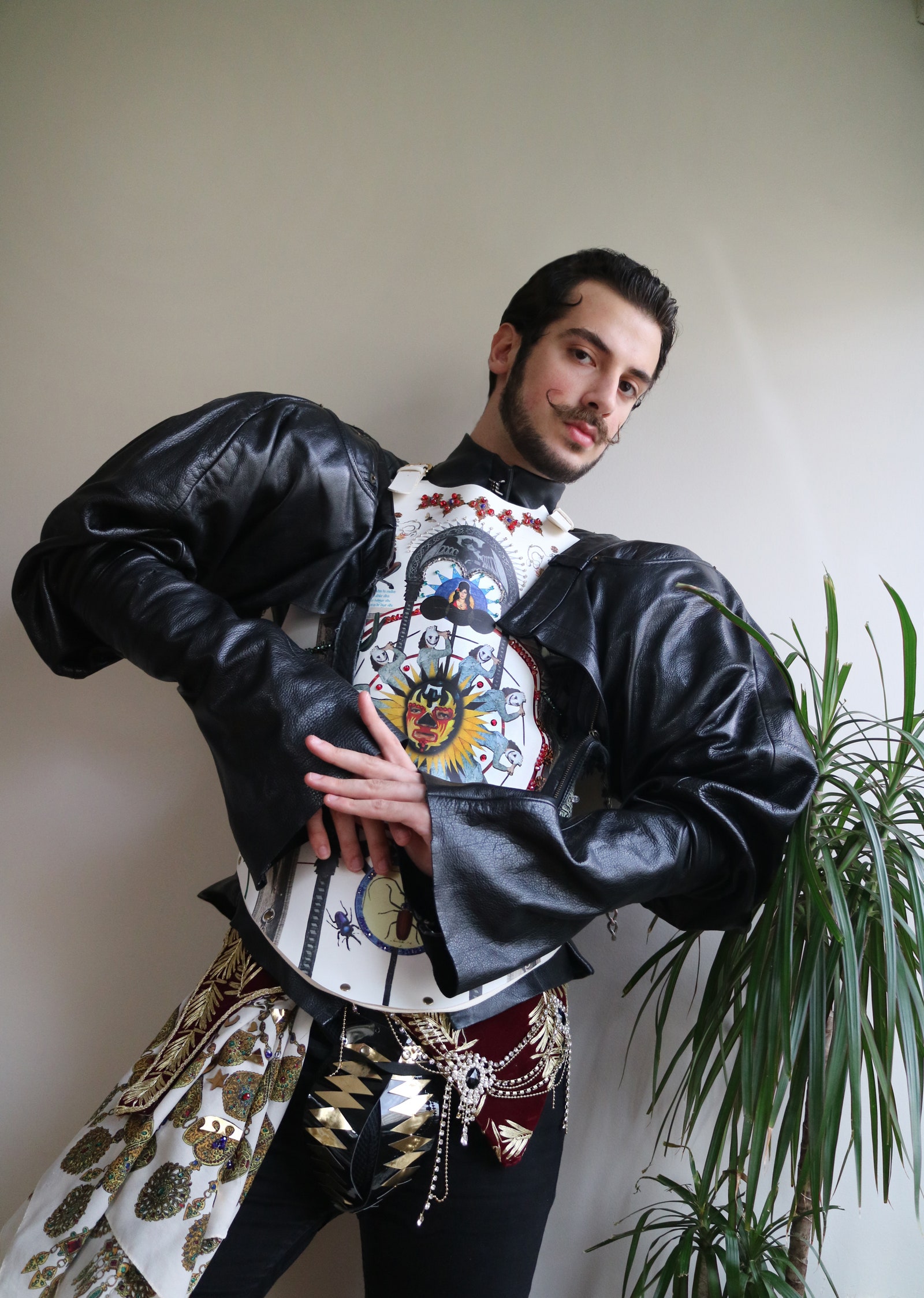 While the armor from his spring 2020 collection has an eerie yesteryear feel, reminiscent of decadent, warped portraiture, they hold a very current meaning for Sagular. This past collection was a dedication to the murder of Turkish trans woman and activist Hande Kader and comes complete with LGBTQI+ references. “I use my armor corsets as a tool to tell my stories through collages, so printed and painted pieces have an important role in my designs,” he says. Much of the forms are inspired by traditional masculine imagery, such as the Mehter costumes of the Ottoman military band. Sagular adds his own point of view to the pieces: On one body plate, he added a collage that includes the image of the Mexican wrestler Lucha Libre, smiling men holding swords, and the lyrics of a Turkish Tango song, “Mazi Kalbimde bir yaradır” (which means, “The past left a pain in my heart”). 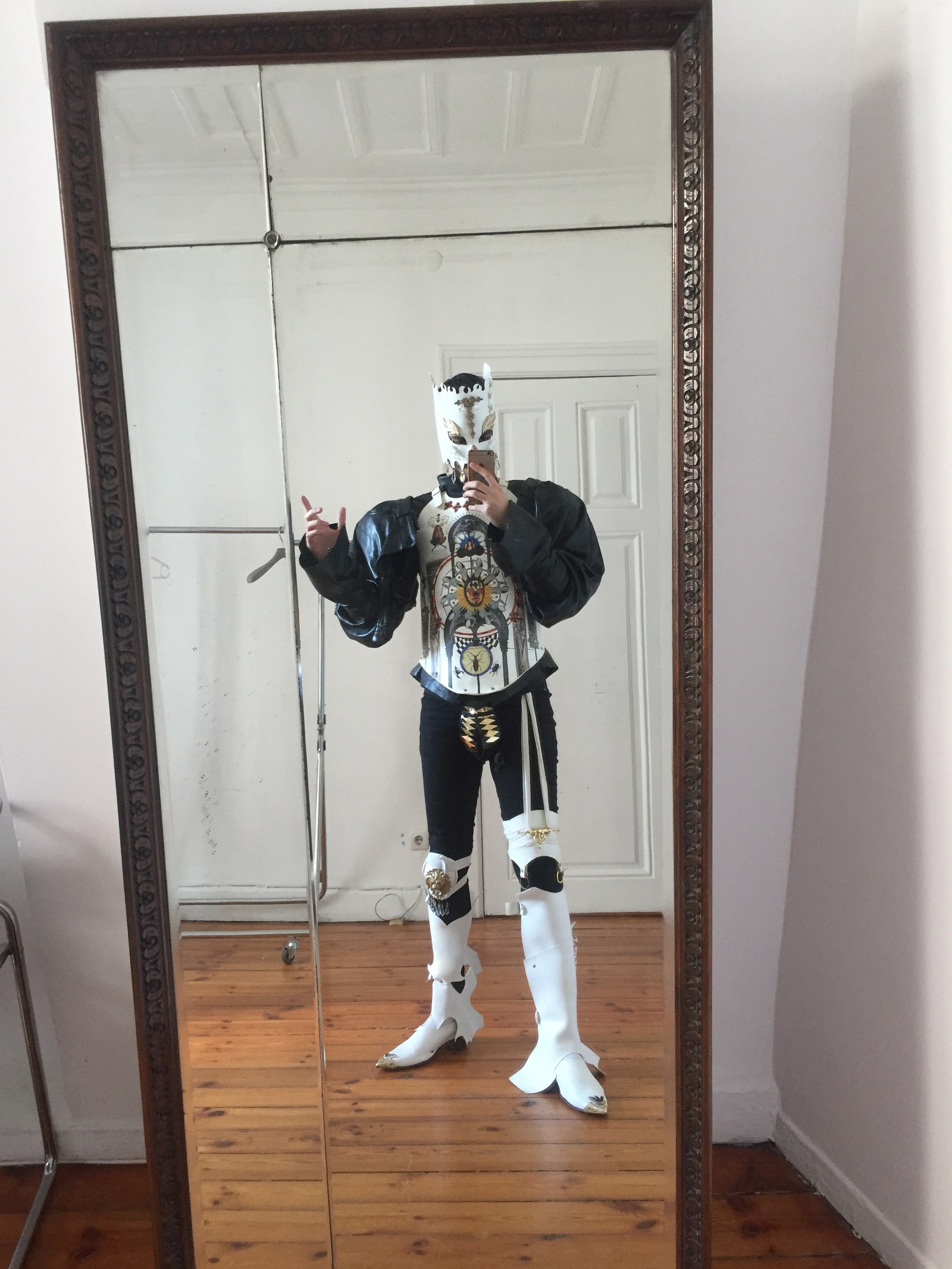 Each of the images represented are symbolic. “The men holding swords with a weird smiling face represent the indifference to the murders of LGBTI+ people in Turkey,” says Sagular. “The two monsters and creatures ironically show how the majority of society [view] queer people in Turkey.” And given that each piece carries such a significant meaning, it is all the more reason for Sagular to wear them out in the world. “Sometimes people stare at me, but l don’t care and ignore them,“ he says. “This is who l am, and I’m not afraid to serve my baroque-macho looks.“

Posted by FASHIONmode News at 4:20 PM