Unseen Detailed Sketches By Karl Lagerfeld Are Up For Auction

The late Karl Lagerfeld was known for throwing away his completed fashion sketches. Now, some of the rare drawings that are still in existence are going to be auctioned in America this month. The 125 sketches, which had previously been privately owned since the 1960s, will be auctioned by Urban Culture Auctions on April 18th in Florida.

Some of the never-seen-before sketches – which were drawn by Lagerfeld while he was working as a couturier at the House of Tiziani in Rome – were drawn for well-known women such as Elizabeth Taylor, Doris Duke and Gina Lollobrigida. “These sketches are the work of one of the most brilliant couturiers of the last half century,” said Rico Baca, co-owner of Urban Culture Auctions. “They are very rare and might not have survived had they remained in Lagerfeld’s possession.” How the previous owner obtained the sketches is not known. 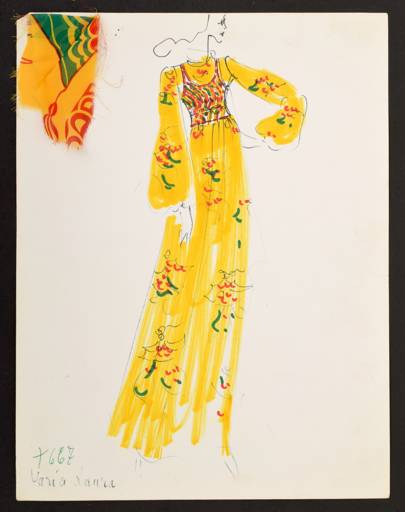 In 2007, Lagerfeld famously spoke of refusing to keep any posessions. “I throw everything away,” Lagerfeld told The New Yorker. “The most important piece of furniture in a house is the garbage can! I keep no archives of my own, no sketches, no photos, no clothes – nothing!”

Lagerfeld died on February 19. His long-standing right-hand woman Virginie Viard has since taken the helm of Chanel. “There was so much publicity about our 2014 sale that, after Karl Lagerfeld’s passing, our phone started ringing off the hook with calls from collectors, museums and people in the fashion industry, asking if we had any more of his sketches available to purchase,” Baca said.