While rumours rumble on about how costly Raf Simons’s exit from Calvin Klein has been for its parent company PVH, Simons himself has been preoccupied with finalising work for his next show at Milan’s Salone de Mobile. As part of his ongoing collaboration with Danish textiles company Kvadrat, Simons has created three housing structures – based on the flat pack designs conceived by architect Jean Prouvé in the 1940s as a solution to the housing crisis in France and its colonies – within a garden in the city's Garage 21 venue. The purpose of the spaces? To show off the new fabrics Simons has created within a domestic environment. There’s even a café housed within the walls.

“It’s not a showroom, it’s an environment, a place of inspiration,” Simons tells The Guardian. “I hope it’s as good as it sounds. It’s so much more massive than anything we’ve done before.” For a man who consistently covered Paris’s Museé Rodin in flowers for his seasonal presentations as creative director of Dior, making an old mechanics workshop bloom should be a cinch, surely?

It’s certainly an antidote to the pace of the fashion industry, which he remains a part of owing to his eponymous menswear line operating out of Antwerp. “[Fashion has] been changing since the 1990s,” Simons muses. “Now, everyone sees the runway show right away, and by the time the clothes are available, people have moved on to something else. This fast communication, it’s exciting but it can be dangerous, too. Damaging.” 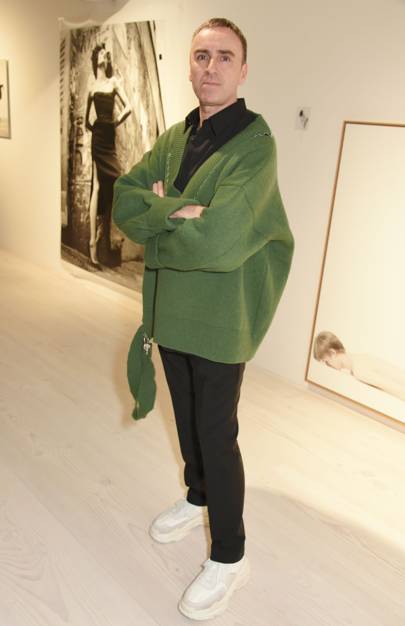 An ardent collector, who is a regular at London's Frieze fair, art is a growing creative outlet he can enjoy at his own stride. “I’m not exactly buying things you can ship back home in a crate and hang on the wall,” he says of looking for a space to display his treasures. “I want to make things public. I’m not interested in setting up a really private foundation. Rather something with education and collaboration built into it.”

If this seems like an about-turn, Simons has “never officially defined [himself] as a fashion designer”. “It frees you up if you go and do something different,” he says of his forays into teaching, collecting and curating exhibitions. His one discreet comment (he is subjected to an NDA) about his departure from Calvin Klein in December – “what you read and what actually happened are not always the same thing” – implies that Simons is in no rush to return to the mainstream fashion game, either.