Nicolas Ghesquière is persuading the international fashion set to stay in New York after the Met Gala 2019 and come fly with him at John F Kennedy International Airport. The Louis Vuittonwomenswear artistic director will stage the brand’s Cruise 2020 show in the TWA Flight Center – the first time an event has been staged in the restored building before it opens to the public.

Designed by Finnish-American architect Eero Saarinen in 1962, the mid-century modern building with its winged roof was declared a New York City landmark in 1994. Although it has been closed since 2001, it was placed on the National Register of Historic Places in 2005. When it opens its doors on May 15, it will be the centrepiece within the TWA Hotel surrounded by eight bars, six restaurants and multiple retail outlets.

“The TWA Flight Center, a sheer evocation of travel itself, is inherently linked to Louis Vuitton’s commitment to exclusive architectural discoveries, to its art of travel, and represents an ideal close to Nicolas Ghesquière’s inspirations,” the brand said in a statement. 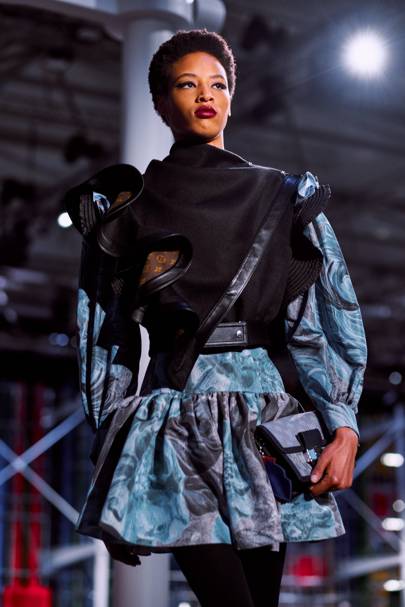 It is not the first time Louis Vuitton has decamped to the States to stage its fashion displays. It has held events at the former New York Stock Exchange, the South Street Seaport, and in a pop-up shop in the Meatpacking District, as well as taking over Bob and Dolores Hope's estate in Palm Springs for Ghesquière’s first cruise show. This year, however, it is only Louis Vuitton and Prada who are convening editors in the US capital. Dior will stage its cruise display in Morocco, Gucci will invite friends of the house to Rome and Chanel will stay in Paris.

Prepare to see Ghesquière’s guests staging Catch Me If You Can-style photos at Louis Vuitton’s show, however, as the storied venue once played the background to Steven Meisel’s cat-and-mouse chase starring Leonardo DiCaprio and Tom Hanks.

Posted by FASHIONmode News at 5:26 PM