While her Captain Marvel colleague Brie Larson continues to promote the Marvel franchise around the world, Gemma Chanhas put on the breaks to enjoy some time out with her parents at the opening of St Regis Hong Kong. The metaphorical cutting of the red tape for the luxury hotel naturally called for a photo moment, however, and Chan happily obliged in look 30 from Huishan Zhang’s autumn/winter 2019 collection.

The long-sleeved A-line silver dress with geometric print and panels of feathers bursting out of it looked bridal. It emulated the attitude of the kind of city bride who swaps her day gown for a flirty knee-length number she can dance in as soon as the family photos are ticked off and dinner is done. 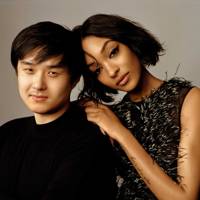 In fact, Chan’s new-season frock was a diplomatic fashion choice. Chinese-born, British-based Zhang’s designs marry his Eastern heritage with his Western influences and have garnered a global fan base, including Naomi Campbell and Gwyneth Paltrow. Editor-approved, he has been shortlisted for the BFC Vogue Fashion Fund over the past two years. Chan's decision to pick his plumed party piece was thus a directional nod to the country whose craft she was there to celebrate during a trip that also saw her take the Star Ferry between Kowloon and Hong Kong Island – the same daily commute her grandma used to do.

Moreover, this considered look surmises the public-facing persona Chan has refined over the past year with the help of stylist Rebecca Corbin-Murray. From the super-sleek, super-pared back gowns she wore on the Crazy Rich Asians tour to the voluminous showstoppers during the 2019 awards seasonand the thematic superhero dressing she dabbled with on the Captain Marveltour, the two Brits have found their stride. Or, as Vogue's Ellie Pithers coined back in January after speaking to the Corbin-Murray, they have found Chan’s sideline: decidedly dramatic dresses.
Posted by FASHIONmode News at 11:11 AM