Coinciding with the release of his debut album “Montero,” American rapper Lil Nas X is collaborating with Jean Paul Gaultier on a capsule collection, available for purchase online Sept. 20.

The collection includes 666 units of a remixed version of the French brand’s archival mesh top, which became popular in the 1990s. Sharing a “gothic glamour” aesthetic with Lil Nas X’s “Montero” album art, the shirt is an adapted archive print from the brand’s Spring/Summer 2001 collection, according to the brand. 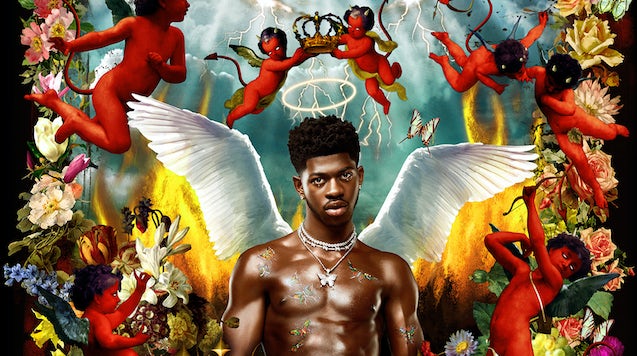 Lil Nas X, who has become known for being a provocateur as much as an artist, has been increasingly heralded for his marketing prowess, leveraging controversy — like a legal snafu with Nike over his “Satan” shoes — for his own benefit. The approach has boosted not only his own star power but also the power he offers the fashion brands with whom he collaborates. During the Met Gala last week, for example, Lil Nas X, who wore a three-piece Versace ensemble, generated the highest media impact value (a measure of marketing activity across digital channels) of any celebrity at the event according to marketing measurement company LaunchMetrics.

After a Brooklyn company sold 666 pairs of customised Nike Air Max 97s as ‘Satan Shoes’ in collaboration with queer rapper Lil Nas X, the sportswear giant sued to protect its brand. Was it the right move?
Posted by FASHIONmode News at 8:24 AM