Things To Know About Versace Pre-Fall 2019

On Sunday evening, Versace arrived in New York for the first time, taking the city by storm with a star-studded show and the return of one of the house's most iconic looks. It was the first time Versace hosted a show in New York

Held at the New York Stock Exchange, the show set centred around a huge gold Versace-ified Statue of Liberty arm. “I am very excited to present Versace for the very first time in New York," Donatella Versace explained. "I wanted to pay homage to this incredible city, bringing the sartorial heritage of Milan and fusing it with the energy of New York and its eclectic nature. This collection is the result of this.” 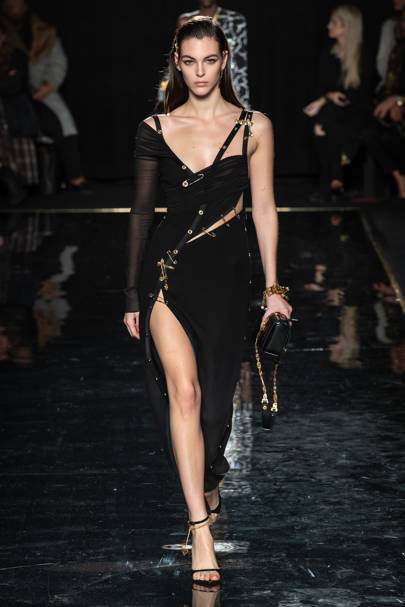 The iconic Medusa safety pin made its return

That dress is back. The gown that made headlines and went down in fashion history when Liz Hurley wore it to the 1994 premiere of Four Weddings and a Funeral, made a return to the catwalk. Worn by Vittoria Ceretti, here, it was reinterpreted with new pin-clip fusion gold accents that concealed and revealed, ruching fabric together to create a contemporary silhouette. 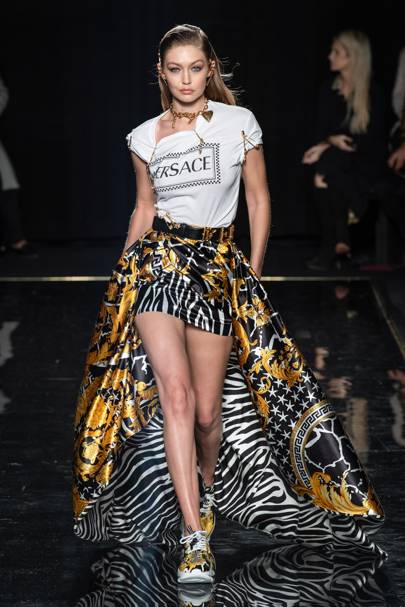 The casting was major

Cast by Piergiorgio Del Moro, the supermodel line-up was all about personality, femininity, and embracing individuality. The show was opened by Kaia Gerber and closed with Amber Valletta. An explosion of prints celebrated Versace’s Italian roots on the New York catwalk. Designs intrinsic to the house were mixed in the boldest combinations – zebra stripes and stars were combined with gold. The ‘Voyage Barocco’ print mixed and matched a melting pot of colour palettes held together by Versace’s most quintessential motifs – the Greek Key and Barocco. 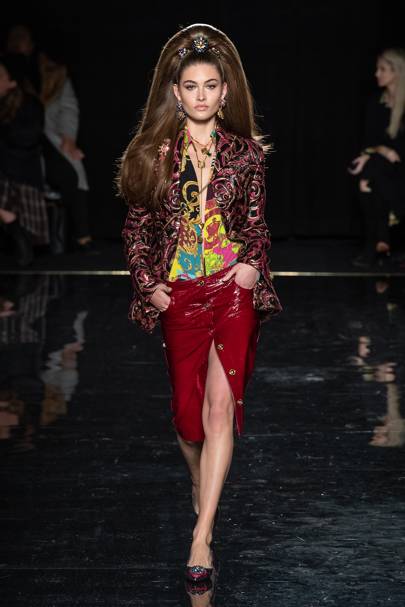 The sky's the limit for hair

The hair looks ran the gamut from coiffed sky-high volume to natural curls, cornrows, braids, old Hollywood waves and beyond, while some models like Luna Bijl and Anna Ewers wore eye-catching Versace hair barrettes encrusted with gems. Donatella wanted the girls to look glamourous, eclectic, fresh, healthy, gorgeous and very much like themselves. Make-up artist Pat McGrath layered on lots of mascara, highlighted cheekbones for a gorgeous glow, groomed brows and finished with a nude pink lip gloss. 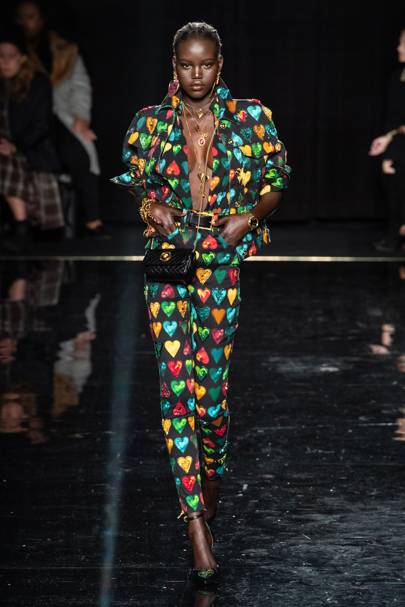 Models wore their heart on their sleeves

The ‘Love Versace’ heart print was inspired by Jim Dine’s designs for Gianni Versace’s New York townhouse. The colourful hearts were printed on silk chiffon that formed one of Versace’s most legendary silhouettes – long sleeves and naval low-cut front – made famous by Jennifer Lopez and prompting the creation of Google Image Search. The clicks to see this dress propelling the development of technology epitomises the importance of Versace’s cultural force.
Posted by FASHIONmode News at 9:31 AM