Introducing “Dreaming”, the 46th edition of the Pirelli calendar shot by Albert Watson.

Filling the pages from January to December are Gigi Hadid with Alexander Wang, Julia Garner, Misty Copeland with Calvin Royal III and Laetitia Casta with Sergei Polunin. Each black and white photograph in Watson’s preferred 16:9 format tells the stories of four fictional women who dream themselves out of their respective realities.

“When I approached this project, I wanted to do it in a way that was different from other photographers, and I wondered what the best way would be,” Watson told press at the unveiling of the 2019 calendar. “I wanted to create something that was more than just a portrait of somebody – I wanted it to look like a film still. I wanted people looking at the calendar to see that my aim was photography in its purest form, exploring the women I was photographing and creating a situation that would convey a positive vision of women today.” 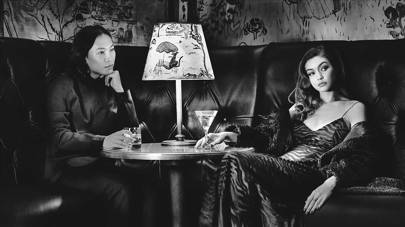 Of Hadid’s character, who has separated from her partner, lives alone in a glass tower and has Wang as her only confidant, Watson noted, “I wanted to convey the sense of a woman thinking about her future, but also showing her in a situation of loneliness. We see her thinking about where she is going to go in life, what she will be doing tomorrow.”

He praised Garner, who moonlights as a botanical photographer, for her expertise on set in a tropical garden: “Julia’s a very, very accomplished actress and she got straight into the character.” Caster, meanwhile, was able to use her own skills as a sculptor and artist to aid her role as painter for Pirelli. “This worked out very well,” Watson added.

The theme of the calendar, which was shot in April between Miami and New York, also allowed Watson to reflect on his own career: “To make a dream come true, you have to work hard,” he explained. “I’ve always taken it step by step, reaching one goal at a time, without wanting to get immediately to the top of the ladder. Even though I sometimes think this ladder could go on up forever, with the top rung ever further away, I think it’s always worth giving yourself increasingly ambitious goals and dreams.”

Posted by FASHIONmode News at 9:45 AM