Chanel To Stop Use Of Exotic Skins And Fur

Ahead of its pre-fall 2019 Métiers d’Art show in New York’s Metropolitan Museum of Art, Chanel has said it will “no longer use exotic skins in [its] future creations”.

The exotic skins in question include crocodile, lizard, snake, stingray and fur, of which Chanel uses very little. The decision is down to the fact it is becoming increasingly difficult to source skins that meet the house’s quality and ethical standards. “There is a problem of supply and that was not Chanel’s business anyway,” Bruno Pavlovsky, president of Chanel fashion and president of Chanel SAS, commented. “We did it because it’s in the air, but it’s not an air people imposed to us. It’s a free choice.” 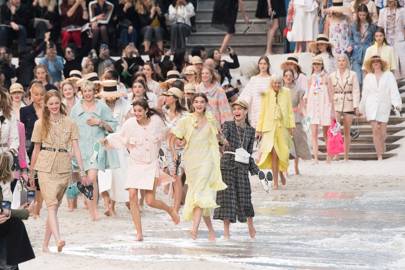 The brand’s attention will shift to the research and development of materials and leathers generated by “agri-food” industries. “The future of high-end products will come from the know-how of what our atelier is able to do,” Pavlovsky continued. It will, however, take time for existing goods containing exotic skins to leave Chanel’s distribution network entirely.

Chanel is the first luxury brand to join labels, including Asos, Nike, H&M, Puma, Arcadia Group and L Brands, which have already banned exotic skins from their product offering. The likes of Armani, Coach, Versace, Michael Kors, Gucci, Burberry and John Galliano have pledged to halt the use of fur, however, they have not made the leap to include skins in their entirety.

Posted by FASHIONmode News at 9:32 AM