A fitting-choice for the event, in honour of the Italian Prime Minister Matteo Renzi and his wife Agnese Landini, the first lady has traditionally called on designers that represent the visiting dignitaries’ home country in her eight years at the White House. 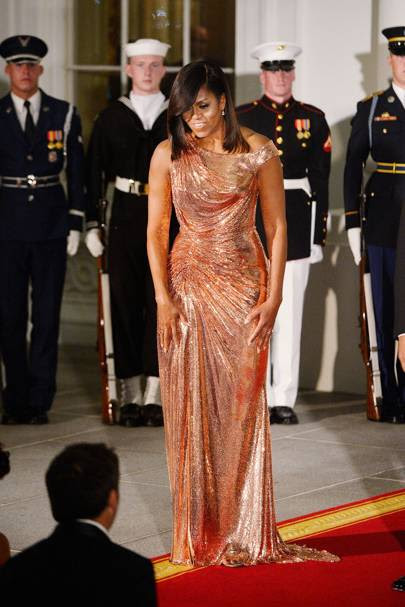 Referencing his wife’s fashion prowess during the evening, as well as that of the Italian first lady, the president said during his speech that he and Renzi had both “married up and because of our wives, we eat better, we dress better, we are better and we thank you both.”

Renzi arrived wearing a suit by Giorgio Armani, who was also present at the dinner, while his wife wore a gown by Ermanno Scervino.

The evening featured a menu of Italian food, with chef Mario Batali joining the White House team to prepare dishes using ingredients from the White House garden: sweet potato ravioli with browned butter and sage was served, followed by warm butternut squash salad and beef pinwheels with broccoli rabe and a dessert of green apple crostata with buttermilk gelato. Guests were treated to entertainment from Gwen Stefani, who performed live.

Posted by FASHIONmode News at 3:09 PM