Question: why has Lauryn Hill never fronted a major fashion campaign before?

“Lauryn Hill does what Lauryn Hill wants to do,” stylist Mel Ottenberg, who has been a primary force in shaping Rihanna’s identity, tells Vogue of how he came to work with Hill on the singer’s autumn/winter 2018 campaign for Woolrich, which saw her take creative control both conceptually behind the camera and as a model in front of it. “She marches to her own beat, and with this project she got to completely show her instincts as a creator. So much of her vibe is in the pictures, it’s so cool.”

Woolrich selected the founding Fugees member to help recast the brand’s identity through its “Woolrich: American Soul Since 1830” series. All contributors following Hill will be picked for their creative ingenuity and contribution to America’s music scene, but Hill, whose solo album The Miseducation of Lauryn Hill was one of the defining neo-soul albums of the late Nineties and paved the way for artists such as Amy Winehouse and Alicia Keys, has been integral in helping forge the new Woolrich path. 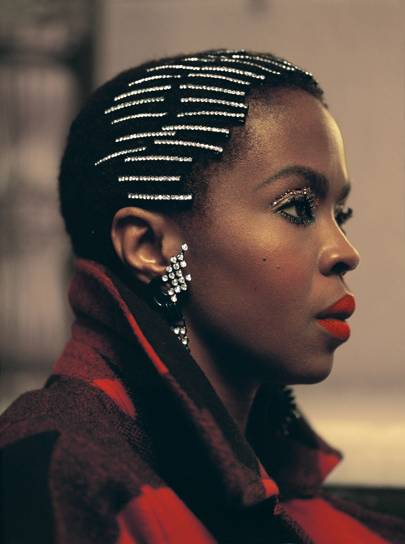 “It was fun to celebrate outfits that display real American grit,” Ottenberg says of Woolrich’s trademark checks, denim, workwear and outerwear that the brand is reviving for autumn. “These pieces have been part of the American vocabulary for over a hundred years, and they are definitely part of my soul as a stylist, and Lauryn’s identity.” For the jackets alone, which are screen-printed with collages of Hill and her eponymous album cover, she came up with 30 jacket sketches – something that came naturally as she has been designing and customising her own clothes for years.

The shoot took place in the Harlem theatre where Hill shot the video for “Doo Wop (That Thing)” 20 years ago in 1998. When the singer walked on set to meet Ottenberg, photographer Jack Davidson and the Onyx Collective, the entire ensemble was in awe. “I rarely get starstruck,” Ottenberg shares, “But she was a force to be reckoned with. She’s a tough cookie, but so beautiful... A mega star, with such modern style.”

There was a certain synergy on the day because of the history steeped in the place, and the new era for both parties. “We had her in all these really wild looks that symbolise who she is now as an artist, and the new approach of Woolrich,” Ottenberg explains. And of course, Hill set the mood by practising the vocals for her 20-year anniversary tour of The Miseducation. “It killed everybody, it was the most exciting ever,” Ottenberg says in fan mode once more. “I have a history of working with strong women, because they inspire and challenge me, but this was really special”. The “Ex-Factor” singer is back in the spotlight, and her beat is still just as infectious.

Posted by FASHIONmode News at 9:07 AM