Fendi marks the second instalment of its #MeandMyPeekaboo series with a new campaign starring three generations of the Kardashian family. The images, which will debut on the brand's social media channels from July 11, feature the trio lying in a grassy meadow in Malibu, carrying Peekaboo bags. North West, who modelled in her first solo shoot for CR Fashion Book aged just 13 months, appears in the images carrying her very own mini version of the bag. The project marks the first time the three women have appeared together in a campaign.

Focusing on the idea of family, the first chapter of #MeAndMyPeekaboo showed creative director Silvia Venturini Fendi alongside her daughters Delfina Delettrez Fendi and Leonetta Luciano Fendi in a video that explored their relationships with one another. "The bag passes the test of time — my daughters like it and my granddaughter asked me to hold on to one for her," Venturini Fendi told WWD. "For the second instalment, the idea was to expand the concept of family, as it's part of our history, and we wanted other families of women. In the case of the Kardashians, they are all three of them very strong women, with strong personalities. It's an iconic family, who is known for its appearance, but we wanted to bring more of an intimate side to the table." 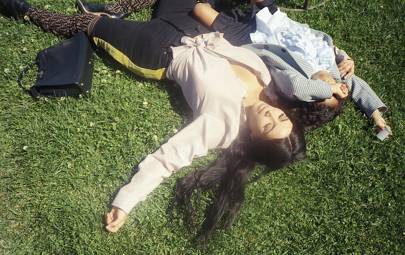 In addition to the campaign imagery, the trio appear in a short film created in Los Angeles and set to Kanye West's "Love Lockdown". Venturini Fendi admits that her friendship with West since his internship at the company was a major factor in her decision to cast the family. "They represent the concept I wanted to express," she said. "They are less controlled here; you can see they let loose, with emotions surfacing. You can tell by the way they look at one another, it's clearly intimate."

The second chapter of the #MeandMyPeekaboo campaign will also include Ewan McGregor's daughters, Clara and Esther, photographed in Los Angeles, sisters Jessica and Krystal Jung photographed in Seoul, and Hong Kong-based mother and daughter duo Kam Fung and Joey Yung. "Fendi has always been a family story," added the brand's CEO Serge Brunschwig. "We worked to capture authentic and intimate family moments that feel private and genuine."

Posted by FASHIONmode News at 6:18 PM