Why Balenciaga Is Going Co-Ed

How will fashion change in 2018? On the Vogue wish list: let’s hope it becomes more ethically and environmentally conscious, as well as more racially diverse; that people working in the industry, particularly the young and the vulnerable, should not have to suffer harassment and mistreatment at its hands; that its relentless pace slows to a more manageable rhythm; that there is less waste, less angst… we could go on. One thing is certain, however; designers will continue to tinker with the show system.

The latest brand to “go co-ed”, in the wake of Gucci, DSquared2, Bottega Veneta, Salvatore Ferragamo Vetements, Burberry et al, is Balenciaga. March 2018 will see the brand combine men’s and women’s collections for the first time, starting with the autumn/winter 2018 collection. The brand will also launch a men’s pre-collection from January 2018.

Demna Gvasalia successfully relaunched the menswear line for spring 2017, sparked by a coat he found in the Balenciaga archive, which turned out to be Cristóbal Balenciaga’s own – and, one better, a coat that he never finished. Gvasalia completed the coat and opened his show with it, in June 2016, and his menswear line has since gone from strength to strength, most recently with a collection that paid homage to a Casual Fridays dad, complete with children. Acne Studios was quick to follow suit, combining its men’s and women’s collections, and will also move to show on the couture schedule, during the Paris haute couture week. 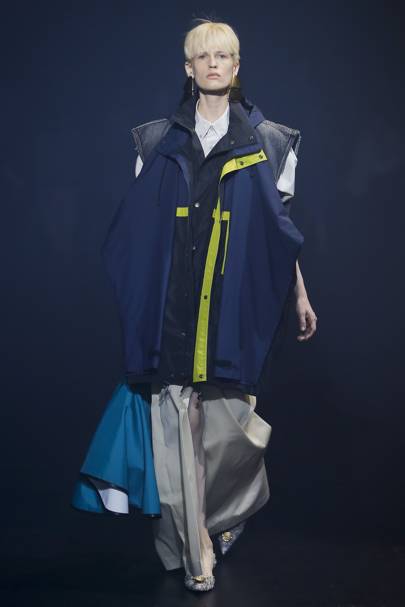 There are multiple reasons why the move makes sense. Financially, it’s cheaper to show once rather than twice. Creatively, many of the collections are conceived of and designed together, so showing them together buttresses the brand’s seasonal statement and its ongoing identity. Humanely, it relieves designers of the pressure to deliver multiple collections in an ever-shrinking time frame.

We all know customers are shopping less prescriptively, dipping into, or sometimes whole-heartedly raiding, collections that aren’t technically designed for their gender. (It’s worth pointing out that girls with long legs and gangly arms – yes, yours truly – have been doing this for years, as have men on the more petite side, for reasons of practicality as much as aesthetics.) Time and money saved and a happier customer? It’s a no brainer.

There are always contrarians. Miuccia Prada has a penchant for sprinkling men in her women’s shows and vice versa, though this season she showed a separate women’s resort collection – the one which usually crops up during the men’s show. “I am against [combining men’s and women’s shows],” she told WWD last year. “To do two creative shows in one is a massacre. And it has to be a huge show, if you want to do it seriously.” Still, never say never.
Posted by FASHIONmode News at 5:17 PM