Karl Lagerfeld brought his audience, including Kristen Stewart, Lily-Rose Depp and Tilda Swinton, back to his birthplace, Hamburg. We weren't here because he felt nostalgic for his home town - that's far too indulgent an emotion for Lagerfeld, who never likes to look back. "I don't have the notion of home too much. I'm at home wherever I go. I bring myself with me," he said backstage. "I'm used to the place even if I had left it very young." What drew Lagerfeld back to Hamburg was not sentiment but architecture. The city has a fabulous new opera house, the Elbphilharmonie, which played host to the show. "I think this building is genius. It looks like no skyscraper on earth," enthused Lagerfeld. Designed by Herzog & de Meuron, a vast modern concert hall has been built on top of Hamburg's biggest dockside warehouse. The breathtaking building, which rises like the prow of an enormous ship over the river, inspired Lagerfeld.

Just like the Elbphilharmonie, which re-appropriated an industrial building to make a stunning, modern arts centre, he re-appropriated the working wardrobe of Hamburg's sailors, to make something fresh.

A 35-piece orchestra played music specially composed by British cellist Oliver Coates, as models stalked the terraced seats of the concert hall in oversized navy cable knits, button front trousers and sailor caps (also appropriated by The Beatles after their spell in Hamburg in the early 1960s). 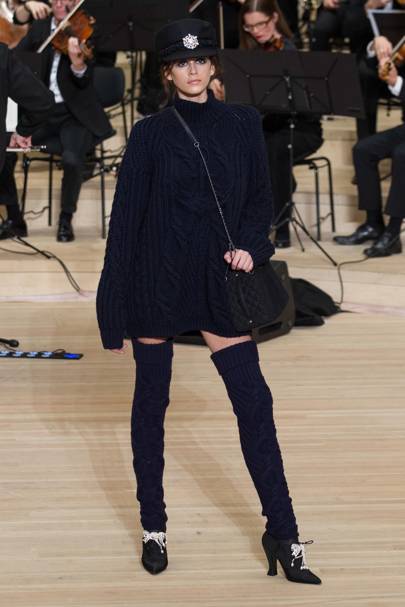 The brand's famous tweed suit came with a sailor collar and was worn with Chanel's hot new bag - an oversized duffel. Other boxy bags hung on chain straps and looked like miniature versions of the shipping containers stacked on Hamburg's dockside.

The suggestion of the cityscape seemed to pervade the collection. Tweed skirt suits were shot through with shimmering lurex as if to mimic the lights of Hamburg reflected in the water that surrounds it. Those tweeds, by the way were hand-made by artisans.

The Métiers d'Art show is dedicated to the small specialist ateliers that Chanel owns, and whose craft and traditions the house preserves. Their skills were on show tonight. The show closed with Anna Ewers and Kaia Gerberwearing nautical striped mini dresses that mimicked sailor's tunics. On closer inspection, the stripes were made entirely from feathers, individually dyed and stitched to create the effect. Those evening pieces were typical of a collection that majored on clothes ladened with craft. The overall look was sober but beautiful - an aesthetic that spoke directly to Lagerfeld's Hamburg roots. "Hamburg was always kind of discreet. It's not a red-carpet city," said the designer. "Hamburg people - they never showed how rich they were but they were very rich," he said and with this un-showy but beautifully crafted collection, Chanel people will do the same.
Posted by FASHIONmode News at 5:20 PM