This evening, Naomi Campbell - alongside an assemblage of models who were dear to the late Azzedine Alaïa - gave a speech that paid tribute to his life and work. Standing on stage, proudly dressed in his creations, they presented a powerful message: that, while Alaïa might have passed away, his legacy will live on. Here, we present Naomi’s speech in its entirety, a heartfelt tribute to the man who she moved in with at 16 years old, the designer who she knew as her papa.

“Everyone in this room knows that Azzedine was able to transform a woman’s body into something special; make you look great and still like a woman. He captured the essence of femininity. But beyond his work as a designer, from the second day I met him, he became my papa.

He was the most generous, kind, compassionate and humble man I have ever known, with a mischievous sense of humour in the glint of his eye, and he filled my life - and the lives of the women on this stage, and all of you in the room who met him - with light and joy. I moved into his home at 16 and he opened my eyes to the world: to artists, art and design, architecture, French and Tunisian culture. How blessed was I to have papa show me these different worlds? 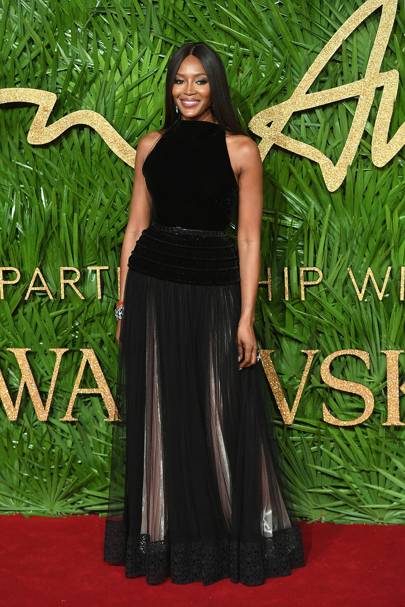 Imagine being put on Concorde and sent to New York at 16 years old, to work with Steven Meisel for American Vogue, dressed head to toe in Alaïa - it was not reality. He never did advertising: he always said that we were his advertising.

Back in the day, our fridges weren't stuffed with food: we bought what we ate on a daily basis and if there was one egg left in his fridge, papa would offer it to me to make an omelette. There is no man who understood me like him, or who saw me in the way that he did. Always when I was with him he would make me feel like my 16-year-old self - and without him, I wouldn’t be the woman I am today.

He protected me in every way possible - even when I was attacked in Paris in 2012, papa came rushing out to stand in front of my attacker while I was pulled to safety. Azzedine was a protector, a teacher, a seeker and defender of all that is good and positive in this world. I am proud to be honouring, along with his daughters, a giant of fashion and a true master of humanity.”

Posted by FASHIONmode News at 5:04 PM