Susan Sarandon On Cars, Clothes And Keeping It Real

"I'm painfully aware of the lottery of birth. Injustice really bothers me,” Susan Sarandon, actress, activist and the new face of Mercedes-Benz told Vogue. “In my business you are constantly developing empathy and imagination - once you can put yourself in another mother’s struggles you can’t resist activism. I want to leave the world a little better or at least know I tried. You create your life and passion with the energy you put out there.”

The star’s latest off-screen project sees her collaborate with US filmmakers Luke Gilford and Bryn Mooser on a "fashion story" for Mercedes-Benz’s #MBCollective 2018 campaign for Concept EQ, the automobile giant’s new electric car.

“We must understand that fossil fuel is done - so the Concept EQ is the future. That is the focus of my story and ultimately why I connected with the brand for this project,” she explained. “They were not afraid of my activism. I was curious how they would wed that to their brand, but the idea of picking me as a creative protégé is very forward thinking.”

Of the decision to work with Gilford and Mooser, who are known for surrealist and virtual reality film projects respectively, Sarandon said: “I always hope to work with challenging people. It had to be different from anything I’ve done previously. I wanted it to be fun and it has to scare me. Now that my children are grown I no longer need to consider school schedules.”

Looking back at 71, my "lifestyle really went through the biggest change when I had three children. Now I’m mostly simplifying. I have the means to buy things of better quality that last,” she revealed of both cars and clothes - now not mutually exclusive owing to her Mercedes-Benz campaign. 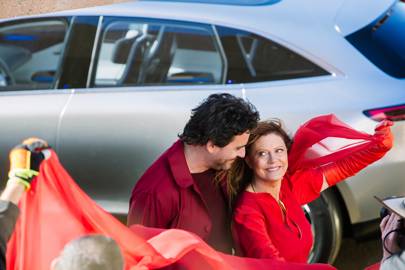 The best piece of advice she has ever been given with regards to the latter is, “Be comfortable as well as beautiful. Don’t let clothing overpower you, let it enhance,” and her fondest fashion memories anchored in the films where period dress was required: “Doris Duke in Bernard and Doris. Annie Savoy in Bull Durham - she was so inventive, outside the box but feminine and sexy in an unusual way.”

Pretty Baby, another favourite owing to the retro, waifish clothes she wore as Hattie, also led to her biggest faux pas. “My first trip to Cannes was for the film,” she recalled. “I wore a beautiful and simple vintage dress that became see-through once the paparazzi started shooting and of course I was braless.”

If she could do it all again, she’d advise her younger self to, “Make your mistakes more quickly and enjoy your beauty more. Other than that I really am fine with the way I’ve dealt with my life.”

Her #MBCollective project might be an unusual one, but it certainly proves you can’t predict where Sarandon will go next.

Posted by FASHIONmode News at 11:46 AM