Fashion designers and artists have long collaborated, typically with the artists illustrations ending up on clothes, but the creative partnership between prolific multi-media artist Sterling Ruby and Raf Simons at Calvin Klein takes things to a new depth. Ruby is one of America’s most celebrated contemporary artist and Simons is using him to help define Calvin Klein in 2017.

Simons has a long history of collaboration with Ruby. In 2014, the pair created a collection together based on Ruby’s paint and bleach splattered work attire. Together, designer and artist are determined to challenge traditional art and fashion hierarchies. So far, Ruby has designed the showroom space at 205 W 39TH Street, created an art installation on the building’s ground floor within which Simons put on his debut show and produced a striking yellow interior installation for the austere John Pawson-designed Calvin flagship in New York.

The latest iteration has now come to the UK with a corner of Selfridges, made-over for Calvin Klein by Ruby. The biggest in store drop of Simons' debut Calvin collection is displayed on coloured plinths and canvas backdrops created in Ruby’s four acre, LA studio complex alongside multi-million dollar paintings, totemic poured sculpture and fabric collages for which he has become famous. Art world purists may disapprove, but Ruby sees all his fashion collaborations as an extension of his artistic practice. 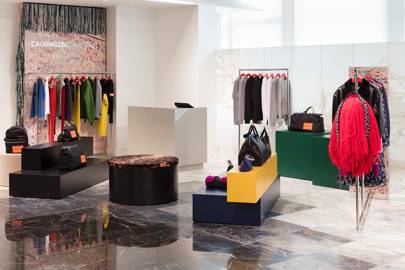 The idea is that you can flick through cocktail dresses sheathed in plastic, deconstructed varsity knits, side stripe trousers and hoodies sporting leather patches printed with an image of Brooke Sheilds in her infamous Calvin ad within the context of Ruby’s work.

The Selfridges experience itself feels far more like shopping that visiting a gallery. Draped on one rail is an oversized woollen cheerleader pompom, similar to those see hanging in the Calvin Klein catwalk space. Created in Ruby’s studio, it has a security tag, to deter art thieves. (Ruby’s work sells for upwards of $1m.)

“I like to think about art as being similar to poetry,” the Ruby once said. “It can’t be proven. It just exists and there’s an aura about it.” The same can’t be said for the transactional act of shopping, although if you can create an ‘aura’ around a product, it is far more likely to fly off the shelves.

Posted by FASHIONmode News at 5:53 PM