If post-irony is the buzzword for our time, nothing quite nails it like the return of the Burberry check. “I have never met her,” Christopher Bailey admitted when I asked him about Danniella Westbrook, the most infamous Burberry check fan. In 2002, she was famously photographed wearing it head-to-toe with her toddler daughter in a matching buggy. “Should I?” he smiled.

Around the urban landscape, you may have noticed, early adaptors are already digging out their early Noughties check shirts - a testament to the power of the new-generation social media designers hooked on Nineties nostalgia to whom Rubchinskiy belongs. Needless to say, the Burberry partnership came as a surprise when it first walked down Rubchinskiy’s runway in St Petersburg in June.

"You know, I have never been snotty about it, because I feel that’s a very important part of our history," Christopher Bailey told me before the show as I quizzed him on a topic once presumed off-limits. In the UK it took Burberry years to elevate itself from the hooligan element who had adopted the brand’s prestigious tartan as their trademark but the check meant different things to different people.

Across the Atlantic, Burberry’s check became the power emblem of hip hop culture. “The only time you wear Burberry to swim”, Jay-Z serenaded Beyoncé in '03 Bonnie & Clyde from 2002. She sizzled in a check bikini in the video, just years after Ja Rule sported a Burberry bucket hat in his and Ashanti’s Always on Time clip.

In the late Nineties, the Burberry check made a trendy revival courtesy of the logo wave, which was taking fashion by storm - from Gucci belts to Chanel bags and every logo in between. Madonna, circa mid-highlands florals-and-tweeds phase, dressed her daughter Lourdes Leon in a Burberry kilt, and some of us may have saved up for the famous check golf trousers and worn them to school. Meanwhile, in 1999, designer Miguel Adrover put an avant-garde spin on it showing inside out Burberry macs re-cut as day dresses. 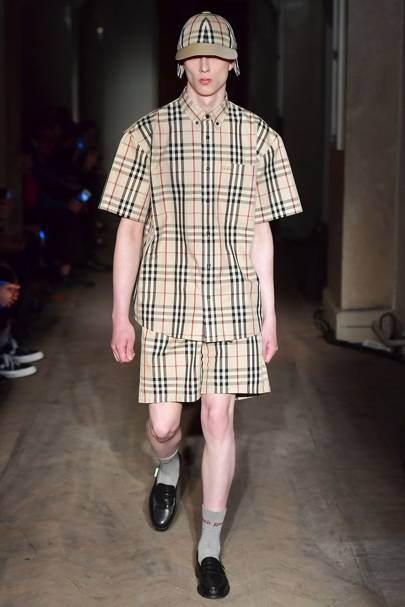 It all culminated in Burberry’s spring/summer 2000 campaign starring Kate Moss in a Scottish-style wedding party entirely checked out in the Burberry tartan.

Rubchinskiy's 2018 take fuses European football culture with the drab but ingenious youth culture he experienced growing up in post-Soviet Moscow in the Nineties. "I see Burberry as the perfect thing for now, for us,” he told me after the show in June, although he kept his references vague. "I only reflect what I see and know in Russia. English people know more about chavs. But I have football fan friends, who are a generation older than me, and they were all about Burberry.”

Christopher Bailey watched from the front row as Rubchinskiy brought back to life this most chequered era of Burberry’s past, re-appropriating it for a new generation of fashion fans to whom Daniella Westbrook is a post-ironic legend. As for his collaboration with Rubchinskiy, Bailey told me it took him back to his early beginnings at the brand. "It’s why I was excited to join this company. I was very familiar with the fact that someone like that," he said, referring to the Danniella Westbrook stereotype, "or someone like the Queen, or like my granddad, or like me as a young fashion student, would go to jumble sales and look for trench coats. It crosses different privileged backgrounds, working class backgrounds, cultures, subcultures, music, the arts, football, sports, and I love that diversity. I think it’s what makes Britishness British."