Former BHS Boss To Be Prosecuted

The  battle of BHS continues this morning, as the Pensions Regulator has revealed it is to prosecute the ill-fated retail chain's former boss, Dominic Chappell, reports the BBC. He will be charged with "failing to provide information and documents the regulator requested during its investigation into the sale of BHS".

The history of the chain's demise is a complicated one. In 2015, Topshop owner Philip Green sold the brand from his Arcadia group to Chappell's Retail Acquisitions for £1. The following year, the collapse of the companyresulted in the loss of 11,000 jobs and a pension deficit of £571 million, leaving many employees who had worked at the company for years without any financial compensation. 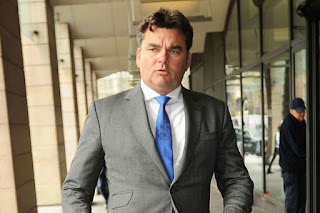 In June last year, Green and Chapelle were summoned before the Business, Innovation and Skills Committee and Work and Pensions Committee to answer questions surrounding the demise of the high-street retailer. Green said he would not take responsibility for the store's closure, but apologised to his former employees and vowed to help resolve the pension deficit. Following warning notices that were sent out last November which outlined why the regulator believed they should both pay into the pension schemes, Green agreed to hand over £363 million in cash to the BHS pension scheme.

Chappell will now appear at Brighton Magistrates' Court on September 20 to face three charges of neglecting or refusing to provide information and documents, without a reasonable excuse. On news of Chappell's prosecution, chair of the committee Frank Field said: "If The Pensions Regulator is frightened of landing the whale, I suppose going after the sprat is the next best thing. Why was Sir Philip Green allowed to get away with an inadequate settlement, in which pensions have been cut, yet Dominic Chappell is going to be sued? I'll be consulting the House of Commons' lawyers on when I can begin to unlock that puzzle, so that Mr Chappell has a fair trial."

Posted by FASHIONmode News at 3:09 PM