How Elvis Presley's Style Lives On

Priscilla Presley couldn’t have timed it better. In a season where Elvis’ wardrobe is being referenced far and wide, his family – marking the 40th anniversary of the King’s death this week – has announced plans for a sprawling show at the O2 in November exhibiting his most memorable tour costumes and guitars from 1969 to 1977, in all their shiny, sparkly glory.

“This carefully curated selection of over 200 artefacts from the Graceland archives will give [people] the opportunity to gain an even greater insight into his life and how he impacted popular culture around the world through his music, movies and personal style,” Priscilla said in a statement. 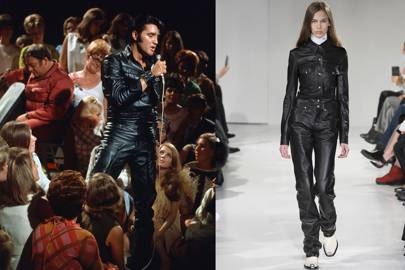 Nothing could be more appropriate in fashion times currently rich on the rock‘n’roll Americana embodied by Elvis’ stage wardrobe. When he wore his legendary head-to-toe black leather outfit for the Elvis comeback TV special in 1968, he got so hot they had to cut him out of it backstage.

The finest example of that is from London’s new hope Michael Halpern, who graduated from Central Saint Martins last year and consults on Atelier Versace.

Halpern’s super-flares and Studio 54 tailoring, meticulously sequinned by hand, nodded at some of Presley’s more flamboyant outings, like the disco ball blazer he wore during the same 1968 concert special as the leather look. From Elton John to Michael Jackson, you can see that jacket’s influence in the entertainers for whom Elvis paved the way — and it was never even meant to exist. When the singer’s costumier Bill Belew wanted to recreate a gold lamé outfit made for him by Nudie’s Rodeo Tailors in 1957, Elvis protested. “I always hated that suit and I won’t wear it,” the King declared. Instead, the sequinned jacket came to be.

For his swansong at Givenchy, Riccardo Tisci dedicated his spring/summer 2017 couture collection to Americana. This was the flared, feathered, fantastical prairie-verse ingrained in Elvis’ own idea of the Land of the Free: cowboys’ clothes elevated to bubblegum confections. 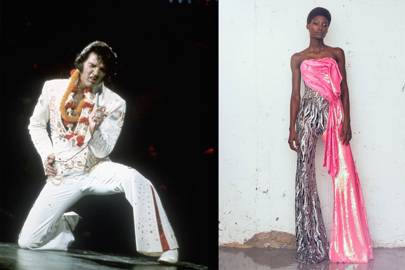 At her cruise 2018 show in the Calabasas desert, Dior’s Maria Grazia Chiurialso drew on the American pioneer look and Native American adornment so entrenched in the classic cowboy uniform, mined by Elvis’ dressmaker for his fabulous costumes.

Just look at the embroidery of his perhaps most famous costume, the so-called Indian Feather Jumpsuit. Or the cape the singer wore with his white knight jumpsuit in the Aloha From Hawaii special in 1973, which was really more rooted in the Mexican poncho than superhero uniforms. An intricate thing embellished with gems in the shape of an American eagle, the cape went missing during dress rehearsals (Elvis threw it into the audience) and so, Bill Belew had to make another one in record time. That cape ended up getting its own first-class seat on a last-minute flight from Los Angeles to Honolulu, and the rest is history.
At Pierpaolo Piccioli’s Valentino, the American eagle, of course, has long been a staple back patch on coats that would make a modern-day Elvis swoon. Off-stage, the singer embodied a rather more casual take on the American wardrobe. His suede jackets, rolled-up dark blue jeans, and Fifties camp shirts (sometimes substituted for denim or rodeo numbers) were really very Prada – or vice versa – and lo and behold if Miuccia Prada wasn’t one of the designers to make a case for the return of the jumpsuit for the spring/summer 2018 men’s shows.

Elvis impersonators shouldn’t get too excited, however: fashion’s modern-day incarnation is rather less flamboyant than what their hero wore on stage. Prada’s recalled the uniforms of race car drivers, while at Lanvin, Lucas Ossendrijver showed a rather luxe boiler suit. Either way, though, Elvis lives.
Posted by FASHIONmode News at 3:04 PM