Tom: It Was Love At First Sight

Tom Ford has revealed that it was a classic case of love at first sight when he met his husband, Richard Buckley, with whom he is about to celebrate his 30th anniversary.

"It was literally one of those things. It was literally love at first sight," he told Jess Cagle in his eponymous interview series, reports People. "The first time I can remember seeing his eyes it freaked me out. I really could almost not look at him. There was something in his eyes that said, 'Literally, the rest of your life.' It was wonderful, but very scary."

Ford first met fashion journalist Buckley when the pair attended a fashion show held by a mutual friend on New Year's Eve in 1986, and - as he recalled - it only took an elevator ride for his feelings to be confirmed. 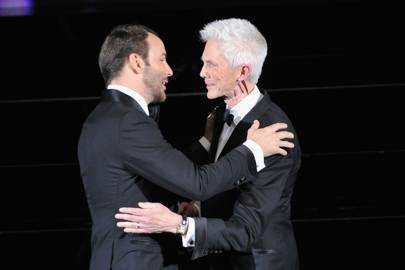 "Our eyes locked and within a month we were living together and we have been together ever since," he smiled. "I am an intuitive person - but also a rational person - and we were in an elevator and we went down about 10 floors and Richard was patting his eyes and talking a lot. And I remember just sort of standing back and looking him up and down – taking him in – and by the time that elevator landed on the ground floor I was like, ‘You’re the one; that’s it; Click! Sold'."

Three decades down the line, the couple - who have a four-year-old son, Alexander John Buckley Ford - have found the secret to relationship longevity, according to the designer.

"First of all, you have to respect each other. If the person you are with is someone you respect who you believe has a great heart and a great soul – as good a heart and soul as you will ever find – don’t ever leave them, because you won’t ever find anyone better," he said. "So even if you have an argument or a fight or there are moments – even years – that can be tough (I don’t mean extended periods of years, but you know we all go through moments in life ), stick it out, work at it - as long as it is someone you respect and admire and you are kindred spirits - because you won’t find a better one. Hold on."