Serena Williams returned to Grand Slam tennis at the French Open in May following the birth of her daughter wearing a black Nike catsuit. It was fabulous for two reasons. One: it made her feel like a superhero, or more accurately, a "queen from Wakanda" in Black Panther. Two: she dedicated the outfit to new mothers, because the suit had helped her cope with the blood clots that had almost cost her life giving birth.

Three months later, Williams’s empowering choice of sportswear is no longer deemed appropriate for the tennis court. “I believe we have sometimes gone too far," French Tennis Federation president Bernard Giudicelli told Tennismagazine of how the professional's clothing choice had swerved industry standards. “Serena’s outfit this year, for example, would no longer be accepted. You have to respect the game and the place.” Though the reinstated French Open guidelines are not to be as restrictive as Wimbledon, where players are required to wear all white, the the FTF will ask manufacturers to share designs for players ahead of next year’s tournament. 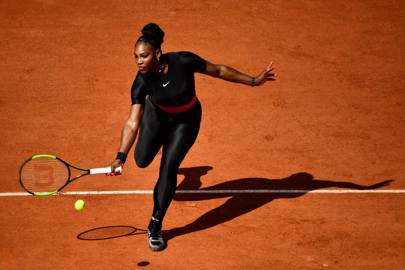 A gracious Williams said that the decision was "not a big deal" and that “the Grand Slams have the right to do what they want to do… If they know that some things are for health reasons then there's no way that they wouldn't be OK with it."

It was her sartorial rhetoric that spoke louder than words, however. The 23-time Grand Slam champion returned to Flushing Meadows wearing the black one-shouldered dress with full tulle skirt from her much-hyped collaboration with Virgil Abloh. While some players might not have had a back-up plan, Williams had a full line-up of Off-White x Nike x Serena Williams to choose from. Snap.

Nike matched the powerful statement with an Instagram post of the brand ambassador wearing the contentious suit and a kick-ass caption: “You can take the superhero out of her costume, but you can never take away her superpowers.” And like that, Serena Williams just did it again.

Posted by FASHIONmode News at 6:31 PM