When Elton John announced his three-year "Farewell Yellow Brick Road" tour, there was only one man who could outfit the superstar. After four decades on stage, Elton will say a fabulously flashy goodbye in Gucci, courtesy of Alessandro Michele, the creative director of the house and the collector with the same magpie eye as the pop icon himself.

"I'm obsessed with him, I'm obsessed with his clothes, I'm obsessed with what he does,” Elton tells Vogue fashion critic Anders Christian Madsen of the friendship that was conceived almost immediately after Alessandro’s debut Gucci show in January 2015. The two were photographed for Vogue at Woodside, the Windsor home of Elton and his husband David Furnish. “For me, the only person that was like that in my life before was Gianni [Versace], and when Gianni died, a part of me died. He saw everything, he loved everything, he channelled everything. Nothing was off limits with him. Alessandro is the first thing that's happened in my life since Gianni died that I can really identify with.”

The admiration is mutual. Alessandro grew up listening to Elton John's music and marvelling at his audacious costumes. “There’s one thing about Elton, which I always repeat: with all his flamboyant looks in the 1970s, he was so masculine,” he tells Vogue, of what cemented Elton as a firm fixture on the designer's moodboards. “He was always so natural and he didn't lose any of himself.” 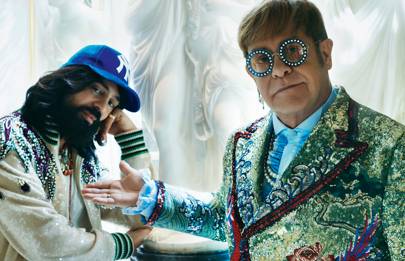 “I never wore any make-up," Elton chimes in. "I wasn't glam rock. I wasn't David Bowie. I was me being a blokey guy wearing these clothes. I had to have humour in my costume.” Alessandro’s personal favourite was the white suit with angelic plume epaulettes, designed by longtime tour costume collaborator Bob Mackie and captured by Terry O’Neill in 1973. "In some of the costumes I wore, I probably did make a fool of myself,” Elton reminisces. "Not to me, but other people thought, 'That looks ridiculous.' It's what your idea of ridiculous is.”

As the appreciation of one another’s work comes full circle in a Gucci-fication of Elton's tour (complete with oversized glasses and the ringmaster suits) prepare for a sequin-strewn overload of what the "creative twins" do best. "I've always been fearless, and that's why I love Alessandro,” Elton adds. “He doesn't give a fuck what people think. He doesn't give a fuck at all.”

Posted by FASHIONmode News at 3:47 PM