The news that Karl Lagerfeld had asked Kaia Gerber to create a capsule collection of ready-to-wear and accessories emerged back in January 2018, and now the fruits of the partnership have emerged.

And so, wetsuit-inspired bodysuits sit alongside logo hoodies, biker jackets and double-breasted tuxedos in the comprehensive line of largely monochrome pieces. Monogram chokers, over-the-knee socks, mini rucksacks and velvet bags, trainers and chain-embellished hats make up the accessories section, which will go on sale on Karl.com and Revolve.comfor two weeks on August 30. The product will then be rolled out to other international e-tailers, followed by a a series of events in Los Angeles, New York and Paris, according to WWD. 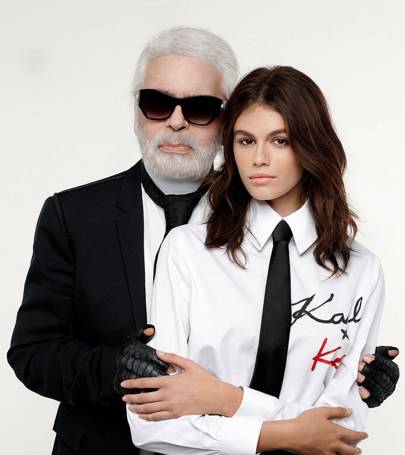 Lagerfeld, who is a keen photographer, shot the campaign himself in his 7L studio in Paris’s Saint-Germain-des-Prés district. The lookbook, however, was shot in LA, immersed in Gerber’s natural habitat of palm trees, skate parks and beach fronts.

Lagerfeld, who first called upon Gerber to open the Chanel spring/summer 2018 show in October, praised his collaborator’s “youthful, independent attitude” during the Paris-LA studio time. The designer will no doubt be hoping to harness the same hype that Tommy Hilfiger garnered through his collaboration with Gigi Hadid. The debut Tommy x Gigi line generated 900 per cent increased traffic to Tommy.com in the 48 hours following the see-now-buy-now show in September 2016. Will Karl Lagerfeld x Kaia cause the same mania? Time will tell.

Posted by FASHIONmode News at 8:34 AM