“I am just a fashion designer, [having sustainable conversations] wasn't part of my plan,” Stella McCartney told the Copenhagen Fashion Summit, before laying down the “appalling” fact that one percent of fashion on our planet is recycled. “It’s not a great place where we are at. Honestly, it takes up more time in my company than creating product… [we’re] just being decent human beings and having a decent label practice, [but] it’s a big problem because there are very few people that are doing that.”

McCartney made herself a promise at the beginning of her career – "I am not going to kill any animals for the name of fashion" – and has not compromised. She has never worked with fur or leather – a choice, she said, that cost her a job at Saint Laurent during Tom Ford’s era at the house – and will not work with glue, because it is made up of animal and fish bones “and god knows what other body parts.” She no longer incorporates PVC in her designs after Adidas informed her of the chemicals that can be cancerous for workers handling the material. And she took it upon herself to develop a sustainable alternative to viscose, because the fashion industry chops down 150 million trees a year: “I committed to that, and I put a deadline to it, and I actually achieved the deadline, which I think is rare," she said, before asking how many of the audience even knew what viscose was. Few put their hands up, indicating that being a solo sustainable fashion pioneer is a lonely place, and has limitations.

“I would love it if the fur industry was like, "Hey Stella, let's give up fur and create a really sustainable fake-fur together”, because that, for me, is a more sustainable business [for] the future,” she said. “I need that, I need help. We are not perfect. At Stella McCartney we are trying really hard, but we are not.”

McCartney has managed to turn her firm belief that “an investment in the environment is an investment in your life” into a fashionable proposition that consumers buy into. Indeed, she’s in the process of buying back her company from Kering, because, she said, as one of the few female leaders in the industry “it would be rude not to”. But other companies have found communicating a commitment to sustainability not quite as straightforward, or successful.

“There’s a feeling that you could turn people off if you [get] preachy, or if you feel like you're trying to present an idea that you're perfect when no company is perfect, and no solution is perfect,” Lily Cole shared of her own experiences working with brands who put social responsibility at their core. 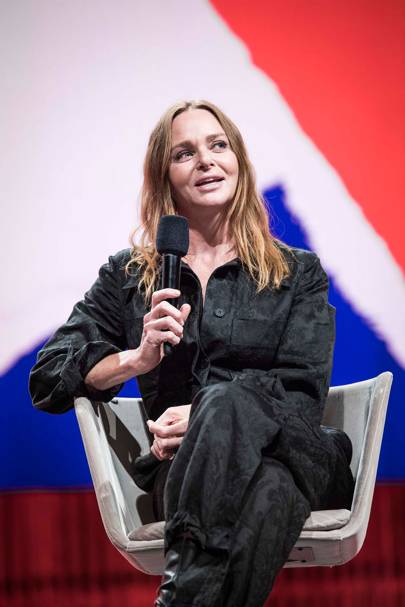 Cole believes, however, that there has been a seismic shift in consumers’ interest and awareness of sustainability over the last 10 to 15 years, and that we’re at a tipping point. “Maybe I’m being naive, but I feel like [sustainability] is actually becoming sexier.” Black-and-white messaging, for her, is the way forward and she refers to the language of food, where fair trade, organic, provenance and packaging are all visibly displayed, to illustrate her point. “The challenge for fashion is how to communicate really complex supply chains, where you might have cotton from India, that's been sewn together in Bangladesh, that's dyed somewhere else, and a zipper added in Italy,” she explained. Her own experience has showed that "the more data you give, the more you kind of alienate and overwhelm", so "simple", "meaningful" ways of connecting the dots between a product's supply chain are the way to communicate and build a transparent relationship with consumers.

For Amber Valletta, one of the summit’s co-hosts, authentic storytelling is also the key. She has called on her celebrity acquaintances, or “valued influencers”, to help her create a short entertaining film about sustainability, which is currently in the production phases. Entitled The Changing Room, it’s about a shopper who is transported into a Wizard of Oz-inspired portal where conscious fashion, rather than fast fashion, is the agenda, and her starry friends provide the solutions. “We’re not just educating, we actually want to change the way that people think.” Entertainment and humour, she believes, is the way to the human heart, and how to fundamentally change behaviour, but, on a basic level, she adds, “we're not talking about this enough!”

“I think that a lot of people really don't know this issue… a lot of people don't know that fashion is the second dirtiest industry in the world,” Valletta continued. “There are a lot of perfectionists within companies and brands… They're scared to come out of the shadows… because if they're not doing enough they're afraid they're going to get some sort of backlash. I think that's really sad that we're doing that to ourselves.”

McCartney urged fellow brands to speak up, because “you have to go into business and try to look out for others... I need people to help create a demand. I need my looms to be all organic and I need as many people to use those looms.” If, like Valletta said, people within fashion don't understand sustainability as a concept, let alone a fundamental need, then it is everyone's responsibility to shout, never mind speak, about it.

Posted by FASHIONmode News at 10:35 AM