Felipe Oliveira Baptista is stepping down as creative director of Lacoste, a role he has held at the heritage French sportswear brand since 2010.

In a statement commending Baptista’s participation in the “writing of a key chapter in the history of Lacoste”, Thierry Guibert, CEO of the Lacoste Group, said: “We are very grateful to him for contributing to the artistic and commercial development of our brand. A new stage will now open and I am extremely confident in the future successes of our brand, emblematic of French know-how and elegance.”

Lacoste’s studio will design the next collection – spring/summer 2019 – and a new creative direction for the brand will be announced in the coming months, the statement continued.

Baptista took to his own Instagram to post a message declaring “the end of an era”, which read: “Eight incredible years made possible with the talent and support of everyone at Lacoste, specially the great design studio. Also, all the amazing pattern cutters, machinists, artists, photographers, stylists, stylists’ assistants, producers, set designers, sound designers, musicians, film directors, casting directors, hair stylists, make-up artists, models, PRs, creative directors, graphic designers, fashion designers, brands, advertising agencies, journalists, writers, actors, choreographers, dancers, athletes and most of all my partner in crime and everything else: Sévi.” 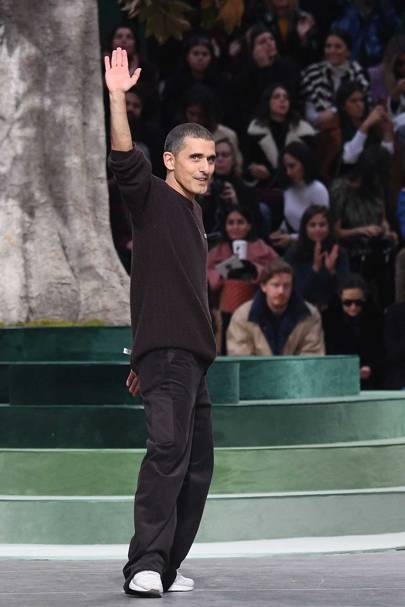 During his eight-year tenure at the house, the Portuguese-born, Paris-based designer reinterpreted the classic tropes of Lacoste – the polo shirt, that crocodile logo – and made them interesting again for a modern consumer. Collaborations played a key part in this. 2017’s Lacoste tie-up with Supreme sold out in 16 minutes and opened the door to a younger audience. 2018’s ‘Endangered Species’ collection with the International Union for Conservation of Nature, which saw Lacoste drop its iconic crocodile logo for the first time in the brand’s 85-year history in favour of motifs of endangered species, was widely publicised and a roaring success, because, Baptista told Vogue, “It said we care.”

Baptista, who studied fashion design at Kingston University in London, then went on to design for Max Mara and Cerruti before founding his own label in 2003 (he closed this in 2013 to focus his efforts on Lacoste), has made no comment on his next move. Will he revive his eponymous label? Stay tuned.

Posted by FASHIONmode News at 11:52 AM