"It was a dream come true,” Katrantzou tells Vogue of receiving the call from Blanchett’s people. The Cannes jury member, it turns out, had seen the Greek designer’s spring/summer 2018 catwalk show, and mentally shopped different aspects of the collection for her French Riviera wardrobe. The final red-carpet confection is an adaptation of various SS18 pieces, with print artwork and adornment engineered especially for Blanchett. 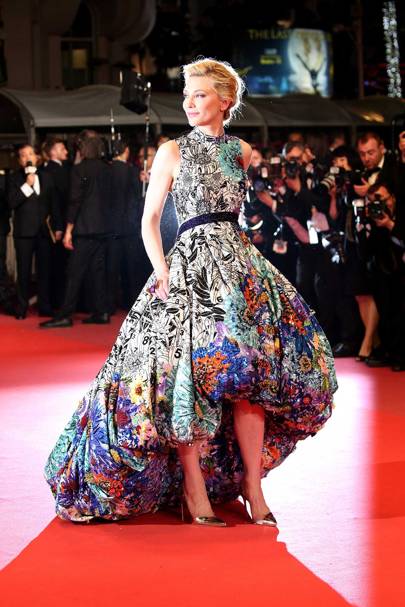 Look closely, Katrantzou says, and you’ll see the paint by numbers story from the collection, which was inspired by nostalgic childhood pastimes. “The dress evolves from this black and white linear print on a racer-back bodice into an explosion of colour and texture in a voluminous asymmetric skirt.”

Blanchett was involved in every step of the process, from OK-ing the silk faille base to the intricate beadwork. “She was incredible to work with, clear in her vision, yet open with her creative approach,” the London Fashion Week star, and former NEWGEN recipient and BFC/Vogue Designer Fashion Fund winner, continues of the experience, which she’ll hold close to her heart. “I have admired Cate for her immense talent, intellect and grace for many years and have always thought of her as the epitome of the woman I aspire to design for.”

Posted by FASHIONmode News at 6:49 PM