Meghan Markle’s wedding dress is arguably the biggest fashion commission and best kept secret of 2018. Now, on May 19, the rumour mill has come to a halt, the bets are off, and Markle has married Prince Harry, and become the Duchess of Sussex, wearing Clare Waight Keller for Givenchy.

The gown - which, Kensington Palace said, epitomises "a timeless minimal elegance referencing the codes of the iconic house" - marks a collaboration between a modern princess and a designer who is emblematic of the new royal era she is leading. British couturier Ralph and Russo and London Fashion Week star Erdem might have been the favourites, but Markle’s ability to keep us guessing is indicative of the fact she is making her own rules. Markle walked herself part of the way down the aisle, she did not promise to “obey” Harry in the service, which was defined by contemporary twists including a gospel choir, and she has previously pledged her commitment to empower women during her time on the world's stage. Waight Keller became the first female artistic director of the historic French fashion house last year, further indicating that this was a moment of quietly confident girl power.

Markle met Waight Keller in early 2018 and "chose to work with her for her timeless and elegant aesthetic, impeccable tailoring, and relaxed demeanour," the statement from the palace continued. "Ms Markle also wanted to highlight the success of a leading British talent who has now served as the creative head of three globally influential fashion houses – Pringle of Scotland, Chloé, and now Givenchy."

The duo worked closely together on the design, which was created out of double bonded silk cady and had a purity that was achieved using six meticulously placed seams. The graphic open bateau neckline was the focus, in order to "gracefully frame the shoulders and emphasise the slender sculpted waist," while the lines of the dress extended towards the back "where the train flowed in soft round folds cushioned by an underskirt in triple silk organza," the statement read. "The slim three-quarter sleeves [added] a note of refined modernity," while the shoes were based on a Givenchy refined pointed couture design made of a silk duchesse satin. 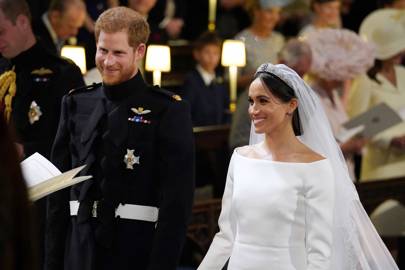 "Clare Waight Keller is one of the most talented British designers," commented Vogue editor-in-chief Edward Enninful. "The dress is beautiful and this is a brilliant moment in Clare Waight Keller’s tenure as the first female artistic director at the storied house of Givenchy."

The veil, meanwhile, was designed to represent the distinctive flora of each Commonwealth country united in one spectacular composition. Made from five metre-long silk tulle with a trim of hand-embroidered flowers in silk threads and organza, it was held in place by Queen Mary's diamond bandeau tiara, lent to Markle by the Queen. The bandeau, made of diamonds and platinum, was complemented by Cartier earrings and a bracelet by the French jeweller.

“It is truly an honour to have been given the opportunity to closely collaborate with Meghan Markle on such a remarkable occasion,” Waight Keller said. "We wanted to create a timeless piece that would emphasise the iconic codes of Givenchy throughout its history, as well as convey modernity through sleek lines and sharp cuts. In contrast, the delicate floral beauty of the veil was a vision Meghan and I shared, a special gesture embracing the commonwealth flora, ascending the circumference of the silk tulle.”
Posted by FASHIONmode News at 10:39 AM