Lucinda Chambers has announced that she is to step down from her position as fashion director of British Vogue. She will depart this summer after a career spanning 36 years at the publication.

"Lucinda has been the most wonderful creative collaborator, as well as friend, throughout my whole editorship," said Alexandra Shulman today. "She has produced many of the most influential and inspiring fashion shoots in the world during her time as fashion director of this magazine as well as a huge number of our most remarkable covers. It is impossible to overstate her vision, commitment, imagination and her ability to bring the best out of teams that work with her. I, like her many admirers, will be excited to see what she produces in her next chapter."

Chambers's creative career started when she abandoned her secretarial ambitions and applied for an art course at Hornsey College of Art. During her time at college, she began to make jewellery as a sideline, selling her creations to friends and at Camden Lock Market on the weekends. When one of her pieces made it on to the pages of a magazine, it inspired her to write a letter to Vogue, asking for an interview. She initially assisted a Ms Davies in accounts, before a chance encounter with the PA to then-editor Beatrix Miller led to an interview, which in turn led to her becoming Miller's assistant. 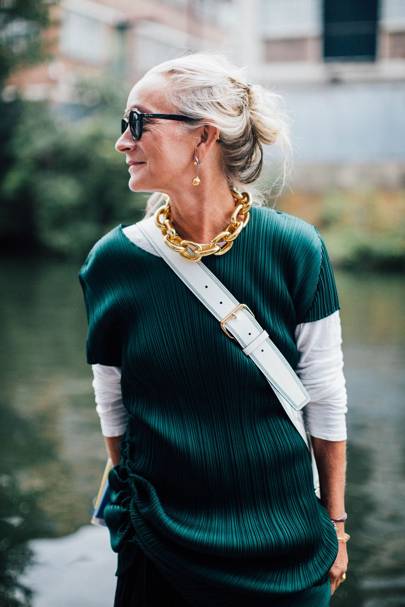 After three years in this role, Chambers became assistant to Grace Coddington, of whom she says "was, and still is, the queen bee of fashion". During her time as Coddington's assistant, Chambers struck up a professional friendship with photographer Mario Testino, which has lasted to this day and has produced some of the most iconic images of our generation. It was after a brief stint at Elle magazine that Chambers returned to Vogue in July 1992 where she became fashion director.

"I adore British Vogue and am so very proud to have been a part of it for so long," Chambers said this afternoon. Her departure from the title 25 years later comes as long-term editor-in-chief Alexandra Shulman steps down. Incoming editor Edward Enninful will take over in August, it was announced in April.

Posted by FASHIONmode News at 2:53 PM