Naomi Campbell has pulled on the same style of white Gap T-shirt and denim shorts as she did in an ad 25 years ago for the brand's latest campaign. Created to celebrate Gap's limited-edition Archive ReIssue collection - a capsule collection of iconic pieces curated from Gap's archives - the shoot sees Campbell at her most playful.

The supermodel danced on the set with a gaggle of young models and actors, who stepped into the shoes (or jeans) of their famous parents, who also starred in Gap ads over the past 20 years - from Lizzy Jagger wearing her mother Jerry Hall's black bodysuit, to Rumer Willis wearing the same denim jacket as her mother Demi Moore did. Campbell was the only one to step back into the same pieces she herself wore and the Londoner told us that, while the T-shirt was the same, a lot had changed.

“This ad was fun,” Campbell told us from Atlanta, where she is currently filming Star. “It was nice to be on set with all the children of people I knew. It was much more of a production than the original ad because it was moving film, whereas the ad in 1992 with Steven Meisel was much quieter. I was so excited to be in that ad when I got the call - and, of course, I loved working with Steven.”

After working with almost all of the major design houses and countless designers over her three-decade career in fashion, Campbell is an advocate of trying new things - her recently flourishing acting career being a good example of this - so why go back to Gap? 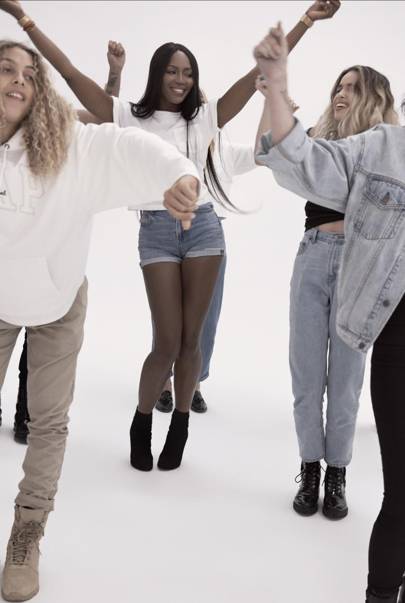 “I think it’s incredible to be able, 25 years later, to be appearing in an ad wearing the same T-shirt in the same size,” she said. “When I came to America, my friends back home – before we had Gap in England – would say to me, ‘Bring me this thing from Gap.’ So I would always bring home lots of presents. I remember it was a really big deal at the time. I didn’t sleep the night before because it was The Gap. When we shot the picture, it was really the first one I had done as myself – I mean where I looked like me, not really dressed up, just in a T-shirt. The pieces are just so comfortable and easy.”

Looking back to the ad in 1992, it's easy to compare that Naomi Campbell with the multi-hyphenate businesswoman who stars in today's ad. So could she offer any advice to her younger self?

“I think I’d just say enjoy your life,” she said. “Life if short and I’m not someone who predicts things or has expectations. There are lots of things I still want to achieve, and I never really have an end goal. I just try to be the best that I can be at whatever I’m doing at that time and stay optimistic. I don’t have a fear of missing out. Whatever everyone else is doing, they can do, and I just try to make sure I am where I need to be right now.”

Posted by FASHIONmode News at 3:30 PM