Ahead of London Fashion Week officially kicking off tomorrow, Vogue contributing editor Bay Garnett is starting proceedings this evening with a special catwalk show for Oxfam. Known for her love of vintage and pre-loved sartorial treasures, Garnett has been scouring the charity's expansive warehouses for the last few months, finding pieces to feature in the show. However, rather than be a mishmash of styles that one might expect, the show has the finesse you would expect from a Vogue editor's eye.

"I've found so many nice things, but instead of mixing it up - like a wedding dress with an army jacket, all idiosyncratic - I wanted it to be much more than that," Garnett told us (insisting that it's not "her" show and "anyone could - and should - do it"). "It's going to be full fashion looks. If it's a bride, it's going to be a full-on bride; if it's a club kid, it will be an authentic club kid; and if it's all about a great pair of jeans and the ultimate T-shirt, then it will be that. I am thinking of it like a big fashion issue of a magazine, and each look is a page pulled out of each shoot." 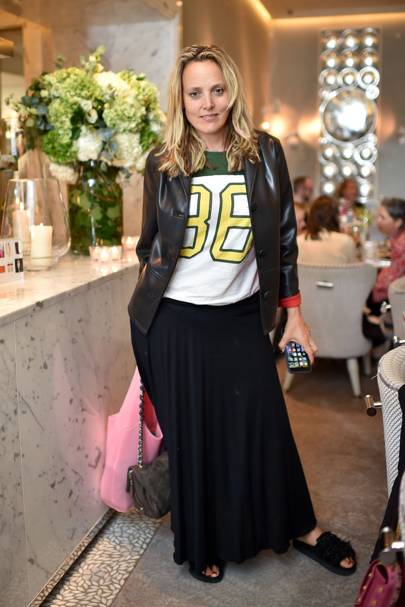 The catwalk is set to follow in the same high-fashion vein, with Stella Tennant, Bella Freud, and Jean Campbell among the famous faces that are preparing to walk in the show, which Oxfam says is essential to shine a spotlight on why the charity's work is so important. "This fabulous fashion show will enable us to make - and strengthen - the connection in the public’s mind between Oxfam fashion and Oxfam’s reason for existence, which is to fight extreme poverty and its root causes around the world," it said today. "It’s fashion fighting poverty, one piece at a time."

For those that can't make the show, there are other ways to get involved with the event. Garnett and Oxfam have created a special baseball T-shirt to mark the occasion - the profits from which will help the charity with its ultimate end goal: to end poverty worldwide. To find out more about Oxfam, go to Oxfam.org.uk.

Posted by FASHIONmode News at 7:11 AM