Melania Trump has settled out of court with a blogger who she was suing for defamation. The first lady agreed to bring the matter to a close after Webster Griffin Tarpley, the blogger in question, agreed to compensate Trump with a “substantial sum” as well as issue a public apology. 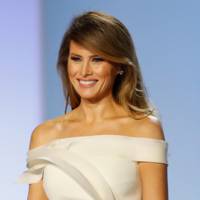 Tarpley is not a blogger as we have come to imagine them, rather he is a 70-year-old author and historian, who often publishes conspiracy theories about major events including 911. He is also not the only publisher who has met with the first lady’s ire on the matter, since news of the settlement comes on the same day that Trump decided to refile her libel lawsuit in New York against the Daily Mail’s parent company, Mail Online. Trump asserts that the newspaper cost her a lucrative business deal, The New York Times reports, after publishing similar unfounded allegations.

Posted by FASHIONmode News at 12:32 PM