Following its September extravaganza in New York, heralding the start of its new see-now, buy-now strategy, Tommy Hilfiger has announced that it is to hold its next ready-to-wear show in Los Angeles in February.

The decision to take the show on the road is said to be about "inclusivity, fusing fashion and entertainment, celebrating pop culture, and connecting our global consumers to inspiring, unexpected fashion experiences", according to Hilfiger, reports WWD. "The casual, cool, chic look that is leading the fashion world this season was born and bred in LA and I knew this show would feel at home on Venice Beach," he added.

The brand reported a positive response to its first see-now, buy-now outing, with several styles selling out straight away and a 900 per cent increase in traffic to its website in the 48 hours following the show. The LA show will incorporate looks from both the Spring 2017 Hilfiger Collection and the second Tommy x Gigi collaboration. 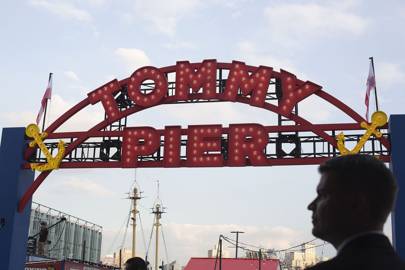 It will be the first time that the brand will be absent from the New York Fashion Week schedule but, rather than conflict with any other big-name brands, the label has decided to show on February 8th, the day before NYFW starts, meaning editors, buyers and other showgoers will be able to make the West Coast to East Coast journey in time for day one of the four-and-a-half week show marathon.

The event has been the subject of many of the latest fashion-news announcements in the last couple of weeks. Last month, NYFW regular Suno announced that it was closing shop with immediate affect and would not be appearing on the February line-up, while this week, Calvin Klein announced its intention to combine its menswear and womenswear collections during its February 10th show.

Posted by FASHIONmode News at 2:44 PM