The news that London Fashion Week favourite Meadham Kirchhoff was closing last year was a loss felt keenly by the British fashion scene, but there is light at the end of the tunnel as one half of the designer duo behind it, Edward Meadham, is back with a new brand, Blue Roses.

"What I want most to convey, is that this is not Meadham Kirchhoff," Meadham said today. "It is not a collection with a huge grandiose theme or story, no elaborate or delicate frocks. It is just some stuff that can be worn on a daily basis in the real world, chucked in the washing machine and worn again - things that will get better with age. This is for the young, my fan-base are not addressed in fashion now - everything is both totally unaffordable to them and aimed at some 'type' remote from them. There is nothing for girls, for kids and weirdos. Blue Roses is for them." 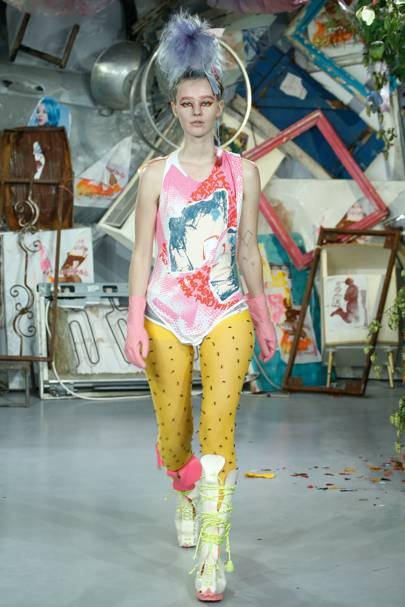 Meadham briefly returned to the fashion scene last February when he created an edit of clothes to accompany Sophia Webster's autumn/winter 2017 footwear collection. His first collection for his own brand launches at Dover Street Market where it will be exclusively on sale, priced between £55 and £260. While hallmarks of Meadham's joyful, experimental aesthetic seen in the early days of Meadham Kirchhoff can be seen, for the designer the common thread is more literal than palpable.

"The name Blue Roses, a reference to Tennessee Williams, has been a reoccurring motif in my work forever," he explained. "A metaphor for 'otherness' of not fitting into the world and not wanting to as well as the illusion of artificial as a blue rose is not a natural occurrence. To me, blue roses are a symbol of defiance, of self-cultivation, in finding strength in what society perceives as weakness."

Posted by FASHIONmode News at 2:47 PM