Wool And The Gang

Prince Charles is well aware that his Campaign for Wool might not be first on the agenda for fashion people launching into a month of international collections – so he forced it into the headlines yesterday with an event at Dumfries House featuring Max Whitlock, performing his Olympic medal-winning routine on a dining room table wearing a wool suit by designer Paul Smith – who then engaged in a water fight with Conde Nast president Nicholas Coleridge (to prove the natural water resistance of wool); and a viewing of the brilliant Slowing Down Fast Fashion film made by Blur’s bassist Alex James, before Livia Firth took to the stage to talk about the ethics of wool.

“If you want beautiful, sustainable fashion, why settle for anything less?” said Firth - and it was difficult not to agree after the advantages of wool had been displayed and discussed in all their glory: naturally renewable, biodegradable, breathable, fire resistant, odour resistant, water resistant and polar opposite to the toxic manmade versions of it that are causing such environmental havoc.

Pledging to act as patron for another five years to the Campaign for Wool he launched eight years ago to promote wools use in fashion and homewares and prevent it being entirely monopolised by unnatural alternatives, Prince Charles was in flying form, joking with guests - who included David Gandy - and happily being pulled around the room by a characteristically effusive Paul Smith who wanted everybody to shake hands with “the boss”. But his serious point was clear. 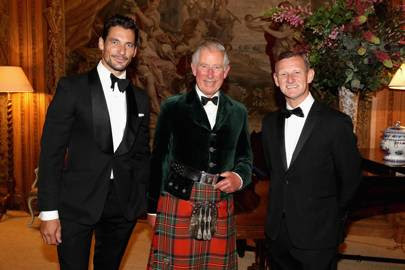 “There is still a lot of work to be done,” he said, acknowledging that fashion designers today are using considerably more wool in their collections than they were a decade ago. “As someone who cares deeply about the environmental impact of life and the effects on our countryside, I urge you all to continue your fantastic work to build on the great achievements of this campaign.”

The event was sponsored by M&S whose CEO, Steve Rowe, spoke at length about his company's dedication to positive environmental practices and showed a brilliant M&S advert from the Sixties extolling the virtues of "Double-O L", James Bond-style, that would surely have viral potential should it be released today):

And it also featured a rousing keynote speech by Allan Savory, president and co-founder of The Savory Institute of Holistic Land Management, that couldn't fail to get those not yet enthused by the sustainability conversation on board.

“Get the knowledge of these issues to the public in any way that you can,” he said, having explained in great detail about the ravaging effects that the elimination of livestock has had on the planet already. “I liken life to a game of cricket: we all have just one innings and I am nearing the end of mine but many of you are just beginning yours. So play the innings of your life for team humanity.”

Posted by FASHIONmode News at 1:21 PM