He is one of the most famous photographers in the world, but it seems that accolades still hold the same significance for Mario Testino as they did in his formative years.

"It's important for all of us to receive accolades because the children in us never leave us," the renowned photographer, who last night was awarded the Fashion & Beauty Lifetime Achievement Award at the Clio Awards, told us. "As a child, if you do something that you're told is good, then you want a prize, and accolades are like our prizes. It's the way that we feel that something is recognised, that we've done something right and I think all of us like that."

Testino is no stranger to being recognised for his work, having won multiple awards over the years. But they are all valued in different ways, he revealed.

"They are all different. This particular one is from the field I work in, so it's interesting that I've been given it by people who do the same job as myself, who know how difficult it is, so when they give you an award it means quite a lot," he said of achieving his latest accolade. He also noted that the OBE that he was awarded in 2014 "was incredible because it was like England recognising me as part of their world"; the Grand Cross rank of the Order of Merit for Distinguished Service in his native Peru "for achieving something abroad" holds great significances for him; and the honorary doctorate that he received from the University Of The Arts is particularly special "because my parents always wanted me to have a title and I never finished any university and instead became a photographer." 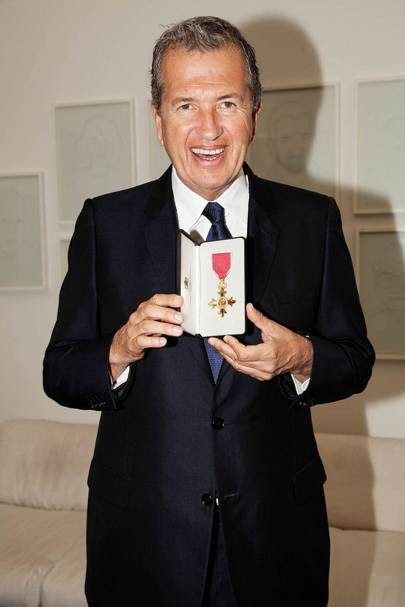 Not only known for his exceptional talent, but also for being one of the most well-liked people in the industry, some of his most famous fans joined him in a short film to showcase the most memorable moments of his career in celebration of his Lifetime Achievement Award. Narrated by Kate Moss, and with appearances from Gigi Hadid, Amber Valletta, Christopher Bailey and Anna Wintour, the "mockumentary" makes it clear how fond people are of him. Does he think having a good relationship with those you work with is the secret to being a successful photographer?

"I work every single day of the year from eight in the morning to nine in the evening, so enjoying that time is very important and you only enjoy it by being with people you like," he revealed. "I think if you look at a model like Kate Moss, her success doesn't just come from being beautiful, but also that she's an enhancement to life - you want to spend your day with her, you want to have fun with her. She's funny, witty, and she has taste. I want to bring that to whoever I work with too. I want to make them have a good day, to have fun, and to feel that what they're doing has meaning, and I want to push them like I want to be pushed by my colleagues to do the best work I can."

Posted by FASHIONmode News at 6:00 PM