For Valentino’s autumn/winter 2022 haute couture show, creative director Pierpaolo Piccioli returned to Rome, where Valentino Garavani founded the storied maison back in 1959. “It’s very personal,” Piccioli told Vogue. “The last time Valentino did a show on the Spanish Steps was in the 1990s.” Below, British Vogue’s fashion critic Anders Christian Madsen breaks down five key talking points from the collection. 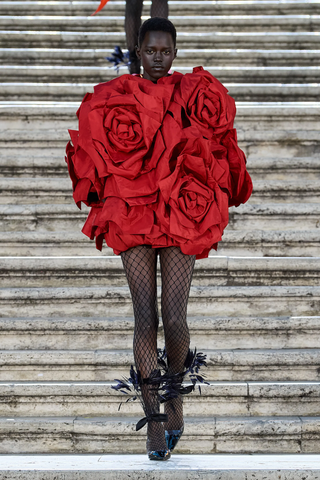 The show took place on the Spanish Steps

Otherworldly bodies descending from the Spanish Steps in the golden evening sun, the romantic voice of Labrinth echoing from beneath the Trinità dei Monti… Cleopatra’s entry into Rome had nothing on Valentino’s haute couture spectacular in Piazza di Spagna. “I start from the finale, always,” Pierpaolo Piccioli said during a preview in Paris days before the show. “What I have in mind is these liquid, colourful drops coming down from the Steps, the volumes light and in movement.” He titled his show The Beginning: a return to the city where Valentino Garavani founded his maison in 1959, a place that has moved with the winds of change since the dawn of time. Like Piccioli’s Valentino, Rome’s codes may remain the same but its values are in eternal evolution. That was the sentiment behind a show he envisioned as “a conversation with Valentino” across the past, the present and the future. 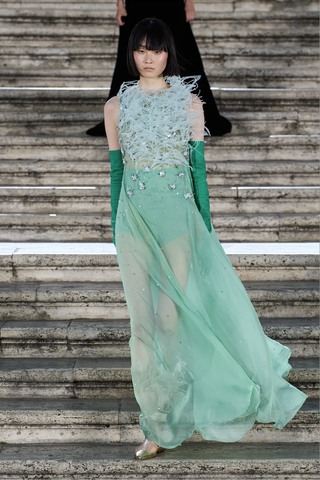 It was a conversation between then and now

Piccioli had been dreaming of doing a show on the 18th-century steps. “It’s very personal. The last time Valentino did a show on the Spanish Steps was in the 1990s. It was a different moment in fashion. It was about lifestyle and the perfection of beauty, the glamour, the supermodels,” he reflected. “I wanted to get the spirit of Valentino – the joie de vivre – because I think it’s the only way of making beauty resilient to the time. On the other hand, there’s a picture I want to deliver, which is different from what it was 45 years ago. It’s the picture of what we live in. The Spanish Steps are the same, the atelier is the same, and in the end, clothes are clothes. I like to keep the rituals of haute couture. But the real difference is in the casting – in the humans – that can tell stories and witness a different moment in this world. I want to empower them and give them a voice and the opportunity to tell their own stories.” 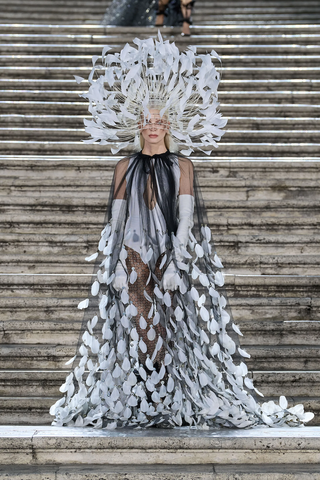 It referenced Valentino’s legacy and Piccioli’s own collections

Piccioli’s approach to the show manifested in a collection that didn’t just poeticise the decades-long legacy of Valentino Garavani, but his own contributions to the house. Rather than pursuing newness, he reflected on what Valentino stands for after 14 years under his own artistic directorship (and 23 years as an employee). Unless you’d spent those years under a rock, you’d immediately recognise the resplendent volumes of his dresses, suits and coats, the hypnotising hues of his gem colours, and the drama of his plumed headpieces bouncing like jellyfish in the stream of the Roman evening breeze. “I wanted to do a reflection about how much of myself is in Valentino, and how much of Valentino is in my identity,” he said. “It’s everything I’ve already done but in a different place.” And a different time, when fashion – with its giant platform – has the power to impact a global audience with the progressive values at the heart of this industry. 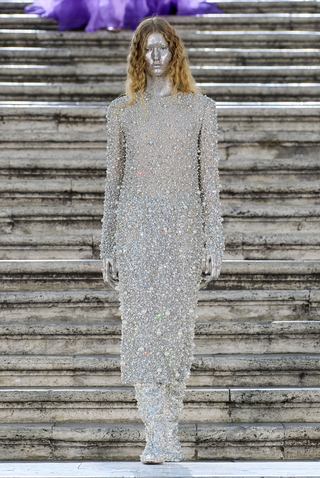 It was activism wrapped in Roman confection

Piccioli’s era at Valentino has followed a time of political divide when the progressive values he fights for – the diversity, inclusivity and self-expression represented in his casting – are contrasted by a rise of reactionary ideas that has only become terrifyingly evident with recent American Supreme Court rulings. In that sense, moments like the Spanish Steps show – these grand gestures of beauty – are a kind of activism on his part. It may be wrapped in majestically coloured taffeta, three-dimensional geometric plumage painstakingly made to evoke Roman mosaics, or voluminous hand-sequined suits, but at the core of Piccioli’s haute couture is a dream that cuts deeper than mind-blowing craftsmanship. It’s a Trojan horse for the mind, as Virgil Abloh used to say, which drives important values into the minds of its spectators through mesmerising displays of beauty. 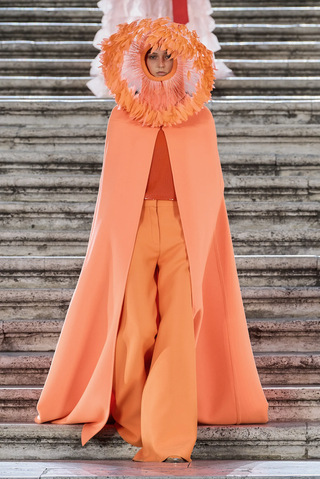 It proved that home is where the heart is

With the likes of Naomi Campbell, Kate Hudson, Ashley Park and Anne Hathaway on the front row – and couture clients eyeing up their newest investment as the looks slow-motioned down the Spanish Steps – the show was testament to the global impact of the new age of haute couture that Piccioli has spearheaded in recent years. But as illustrated by the people who joined them – Valentino’s co-founder Giancarlo Giammetti, Piccioli’s family, and their dog Miranda – it’s a success achieved through a grounded approach to the industry, to the mainstream fame he has gained, and everything that comes with it. At the heart of Piccioli’s progression-driven age of Valentino are a realness, friendliness and ease that remain his greatest assets.
Posted by FASHIONmode News at 8:12 AM