"AIR" is a new progression in the firm's `Street à Couture` approach, where lines continue to modify their formal axes to offer a message of freshness and street full of functionality, colour and sophistication.

On this occasion, OTEYZA reflects on `air' as a true vector and form creator in an exercise of constant balance, rhythm and progression. Movement is the VOICE of form, the WORD of couture, the TRUTH of creation.

OTEYZA is also nourished by the great genius Raoul Dufy and is rubbed off on his colourful joie de vivre; the land and seascapes of the Midi Mediterraneen or by the strength and lightness of his line, marked by the subtle characterization of the form. 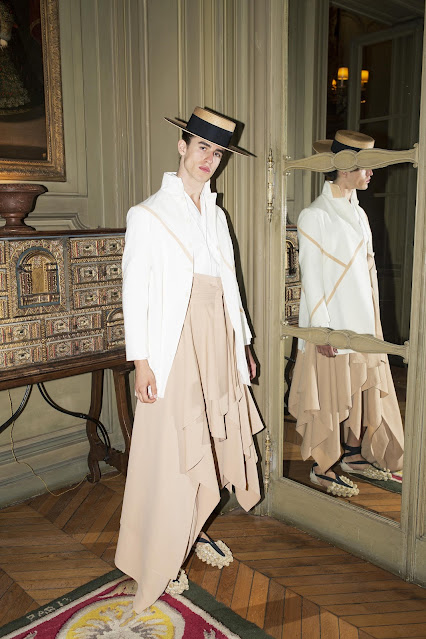 Splashed lines in the pieces affirm that in OTEYZA the past and the future are contemporary, that there are no time limits: the lines mark the sartorial gravity and the joy and drive of modernity.

In this season, pure lines in unstructured shapes with larger volumes, as well as pieces encompassed in a more urban atmosphere, will gain force, traced by and agile and versatile rhythm. Side slits and raised collars; sets of long volumes in trench coats and pants; pleated bermuda shorts, polo shirts and sneakers, as well as t-shirts and sweatshirts with great expression thanks to their piping, will compound the new collection, gifted with refined lines.

OTEYZA is a Spanish menswear firm founded in 2012 by Paul García de Oteyza and Caterina Pañeda. The designer duo vindicates traditional tailoring from their workshop in Madrid, becoming one of the greatest defenders and exponents of contemporary custom made and luxury prét-a-couture.
The house marks a new time for the Spanish cloth being pioneer in the recovery of the Spanish merino wool. A global project with the highest levels of ESG (Environmental Social Governance) initiated ten years ago and enclosing from the animal development to its entire local community. Thus, participating in the fundamental axes of the rural and industrial development of fashion in Spain.

On the other hand, it has also received recognitions such as the 2018 Best Male Collection award from T MAGAZINE, finalists in VOGUE's Who's On Next 2019, or named Ambassador of Madrid Capital of Fashion in 2020.
Posted by FASHIONmode News at 8:54 AM