Riding out — way out — to the Agafay desert one hour outside Marrakech, a van full of English and American editors were gobsmacked by the sight of two camels, as still as statues, silhouetted perfectly on the crest of a rocky dune.

An hour later, seated around a circular pool for Saint Laurent’s spring 2023 show, they were mesmerized again, drinking in Anthony Vaccarello’s sensual, tuxedo-inspired silhouettes rippled by a brisk evening wind.

Here was a destination show laden with history, given how much Morocco revved and shaped the aesthetic of fashion icon Yves Saint Laurent, who fell in love with Marrakech from his very first visit in 1966 with his partner Pierre Bergé. Earlier in the day, editors filed through Dar el Hanch, the riad they bought on a whim, and snapped photos of the snake the legendary designer painted in the dining room. If only the walls could talk, a tour guide snickered.

Yet Vaccarello said he sidestepped cliches around the mythology of Marrakech and YSL, preferring to elaborate on his terrific fall 2022 women’s collection, plopping similar smokings and strong-shouldered coats on men, to elegant effect. That much of the collection was black was a no-brainer.

“Black, for me, it’s the best way to see a silhouette, especially in the desert — you see it clearly, almost like a sketch,” he said before the show.

As show venues go, Saint Laurent’s was dream-like, silvery boxes erected on a Mars-like stretch of barren hills tinted orange by the sunset.

It was Dominic Fike’s first time in Morocco. “Check it out, it’s a lake,” he said, pointing to the water glinting in the last licks of daylight. “It’s beautiful. With all the camels and things, it’s exactly how I imagined. We are in Africa, right?” 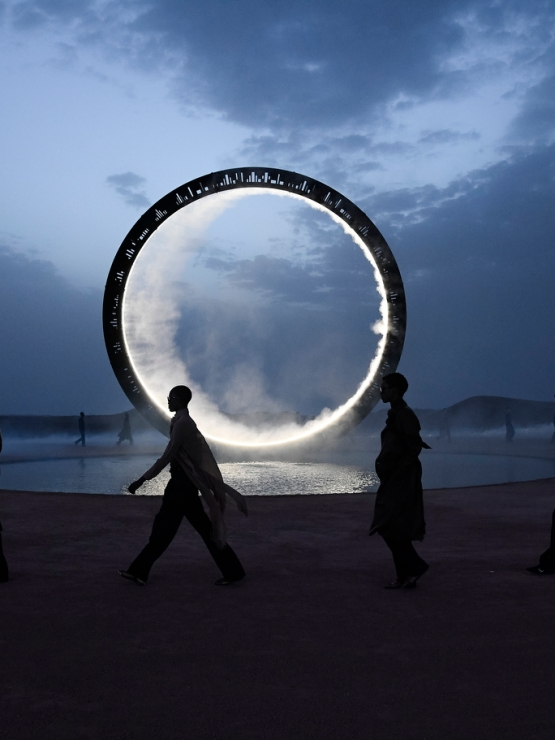 Luka Sabbat disregarded the memo advising comfortable footwear for desert conditions, arriving at his seat atop towering platform boots that he quickly tossed for cork-soled sandals.

“I didn’t give up. I’m just taking a break from them. I’m doing a photo diary right now for Interview mag so I need to run around,” he said as the likes of Anja Rubik and Milena Smit struck poses before the show.

Fog machines fired up, sending haze drifting across the set as the models whisked around the man-made well. One noticed the strong shoulder line of Vaccarello’s fine tailoring, and the trousers tight on the hips and then widening out and flapping in the wind. Everything looked luxurious and compellingly soigné, executed in fine satins, velvets, grain de poudre — as YSL a fabric as there ever was — and buttery leather.

Just before the finale, a circle of light appeared in the pond, and a hulking lighting rig slowly emerged and propped itself up vertically, like some portal into another dimension. The sense of wonder reached another crescendo.

Backstage Vaccarello didn’t read too much into his design effort other than a wish to show a more fluid, rounder take on Saint Laurent menswear, with small doses of fashion folly.

“A fur coat in the desert?” he said about the hulking fluff of a coat that appeared about midway through the show. “Why not? It’s chic.”
Posted by FASHIONmode News at 9:09 AM