A Sai Ta is putting his hot-pink Hot Wok dress into production to raise money for Black Lives Matter, Solace Women’s Aid and The Voice of Domestic Workers. You know the one. Rihanna wore the asymmetric tie-dye design on holiday in October, to Instagram-breaking effect. To date, the video of her eye-wateringly sassy stride to the pool – Bottega Veneta Pouch in hand, Fenty shades on – has had over 24 million views. Ta, the Fashion East graduate behind club-kid favourite ASAI, could not have asked for better publicity. But, rather than capitalise on the stratospheric rise in interest in his 2017-born brand, Ta opted not to sell it. Now, he has chosen to utilise the viral design – which only he himself and Rihanna own – to “contribute something tangible” to the fight against systemic racism and injustice.

“In our current world, there’s no doubt that money talks,” Ta tells British Vogue. “My intention is to support three charities that are significant in recognising oppression and, specifically, not to profit from sales of the dress. It’s a clear act on my part to mobilise the change that I can through my brand.” After Rih’s slo-mo video circulated the internet, numerous retailers pleaded with Ta to put the Hot Wok dress into production. He would not budge, refusing to capitalise on the power of an influencer and collaborator (Ta has created a capsule collection for Fenty). Fashion, Ta believes, is political and has the power to instigate change. He will no longer be silent about this, particularly in light of the Black Lives Matter protests sparked by the death of George Floyd. 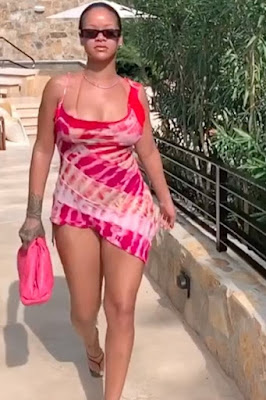 “I am a Vietnamese-Chinese second-generation refugee into the UK,” says Ta. “People of colour, diversity and cast-out voices have always been central to the building of my brand, so I must speak on the issue and I am committed to always having a voice on it.” The £300 dress – which customers can purchase directly through Ta by emailing info@asaita.co.uk – is significant because, the designer says, “It allows you to be seen.” Model Elizabeth Osagie-Ero, who premiered the look during Nigeria’s Arise Fashion Week where Ta was a guest designer, contacted Ta after he announced the charitable initiative. “I see myself,” she told him. “This is so powerful for me,” he says. “I feel seen and heard, which is what I need, and what I demand for the voices who are not.”

Ta has since posted messages of his intent moving forward. A percentage of all future ASAI revenue will go to Black Lives Matter, and he is urging the industry to do what it can to support minorities and to redress the privileges and prejudice that make racism an enduring issue. “Your percentage reflects your compassion,” he said on 1 June. “To be honest, nobody should be using resources in fashion to further pollute this world until what they create supports black lives and people of colour on every level.”

He reiterated his position as a force for change to British Vogue: “My very existence in the fashion industry is to protest against injustice and inequality and to be a voice for what is not correct but is wrongfully condoned. I don’t want to just talk about what I want to do, my words are backed by action.” Let’s hope Ta’s rallying cry is heard.

Posted by FASHIONmode News at 9:26 AM