Rihanna’s Latest Fenty Drop Has Revolution At Its Core

Following weeks of confinement owing to the Covid-19 pandemic, and against the backdrop of rising anti-racism movements, Rihanna’s latest Fenty drop champions the energising, optimistic attitude of young people fighting for change. Release 6-20, a three-part series hitting Fenty.com throughout June, celebrates “the irrepressible defiance, creativity, hope and spirit of youth,” according to the brand.

With rebelliousness at its core, the new Fenty edit is chock-full of counter-cultural references from the ’90s – the decade Rihanna, who celebrated her 32nd birthday at the beginning of the health crisis, grew up in – including baggy rave silhouettes, psychedelic tie-dye prints, and grunge hoodies. Thigh-grazing hemlines will be a must this month, if the Fenty founder has anything to do with it.

Drop one, which launches on 11th June, eases Fenty fans in with monochrome daywear. Slogans are introduced in the second line, before it’s full throttle into loud-and-proud prints for the height of summer. 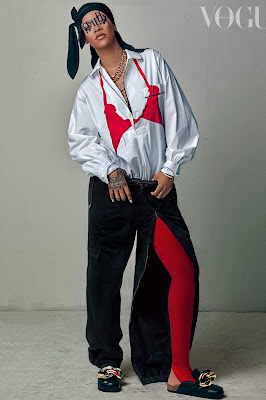 The accompanying mini campaign mirrors the mood of the Release. Captured by London-based photographer Lea Colombo, models, artists and musicians from within the Fenty family wear the clothes and embody the “freedom, diversity, unity and solidarity” that Rihanna’s brand – and her entire Fenty empire – has championed since its genesis.

The businesswoman – who who has said she was overwhelmed by the “magnitude of devastation, anger, [and] sadness [she] felt” after the murder of George Floyd – has, over the past week, been using her personal platform to encourage her fans to vote for urgent reform, while donating to several anti-racism charities through Fenty. “Fenty as a brand was created to elevate beauty, power and freedom,” she wrote on Black Out Tuesday, when Fenty chose not to do any business in support of the movement. “At this very moment racists are attempting to rip those values away from black people and we will not stand by and let that happen. We are too powerful, creative and resilient. In support of the black community, we will be donating funds to Colour Of Change and Movement For Black Lives. We ask you to speak up, stand up, and pull up against racism and discrimination in all forms.”

“New world energy,” Rihanna captioned the Release 6-20 imagery a week later, while another post read, “Dreaming of tomorrow”. Shop the edit, with revolution sewn into its seams, from 11th June at Fenty.com.

Posted by FASHIONmode News at 3:59 PM