Adidas & Allbirds Are Joining Forces – And Rewriting The Rules Of Competition

What’s business without a little competition? Not only do fashion designers constantly compete with each other for relevance, but the very nature of running a brand is cutthroat: You hide your sources, you wrangle exclusivity deals, you always keep an eye on your peers. You certainly don’t share your ideas and capabilities with them – but what if you started to?

Getting over fashion’s history of cutthroat competition has emerged as a theme in these unprecedented times. Designers have penned open letters urging for change, with an emphasis on collaboration and information sharing for the greater good. Fashion’s governing bodies have joined forces, too, with plans to rejig fashion weeks on a global scale. But nothing feels as surprising or agenda-setting as today’s news from Adidas and Allbirds. They’ve announced a first-of-its-kind collaboration to create a sneaker with the “lowest ever carbon footprint”.

The yet-to-be-completed shoes will be stamped with the logos of both companies, though we would have billed them as competitors just yesterday. How else do you describe a global sportswear brand known for its sneakers and an environmentally-minded start-up that makes… sneakers? It’s fair to assume Adidas has noticed the swift rise of Allbirds’s wool Runners, which have replaced the Stan Smith as the go-to “fashion sneaker” for so many of us. It’s also fair to assume that in its early days, Allbirds viewed Adidas as the “establishment”, the corporate giant that set the bar extremely high.

But Adidas and Allbirds also have a lot in common, namely their commitment to reducing their brands’ environmental impacts. Adidas mainstreamed recycled plastic with its Parley for the Oceans collaborations, and introduced a fully-recyclable, closed-loop sneaker last year. Allbirds brought natural, renewable resources like wool and sugarcane to the sport world and recently began labelling all of its products by their carbon output. Those are major achievements on their own – but in a meeting last year, both teams realised they’d get a lot closer to their goals if they just worked together.

“Ultimately, collaboration is the thing,” James Carnes, vice president of brand strategy at Adidas, tells Vogue. “We’ve already realised we’re doing the right thing because we’re moving so much faster than either of us would have if we were trying to do this alone.”

The sneaker they’re working on will ideally have a carbon output of 2kg or less. To call that ambitious would be an understatement; the average sneaker has a carbon output of 13.6kg, accounting for the materials, dyes, manufacturing processes, shipping, packaging, and many other factors. Carnes says the carbon output of Adidas sneakers averages between 10 and 15kg, while Allbirds’s sneakers have a lower number, around 7kg. “Getting to two kilograms is like running a two-minute mile,” Carnes says. “It seems impossible, but that’s what gets us excited.” 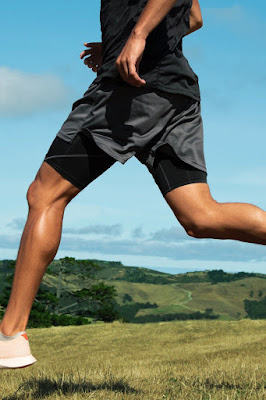 Together, they’re “unlocking” the best practices for sneaker production across every part of the supply chain. “We both have a number of different tools and innovations in our stable, and it was really easy to start a conversation about how we could bring them together,” Carnes says. “Adidas brought the tools we have, like recycling with Parley, and Allbirds brought their carbon rating system and their sustainable wool and sugarcane foam, and we laid those out as options. That was just the first step, making a shoe with low-carbon materials. The next is [figuring out] the processes, the packaging, and delivering it to the customer with the lowest amount of fuel and energy.”

“There’s a [carbon] number for every component and every process, and you have to add it up so the number gets as close to zero as possible,” Allbirds cofounder Tim Brown adds. “The idea that the rules are very clearly defined is exciting, and we’re adding this new constraint of carbon accounting. You start to understand that every component you add, or the way the foam is moulded, it all has an impact. We’re working together towards a clear goal, bringing what we both have to offer and thinking about how those [capabilities] can be combined in unique and different ways to create a product that works. But I think the metaphor of running a two-minute mile is absolutely appropriate,” he continues. “What we’re going after is extraordinarily difficult.”

It’s unclear when the sneaker will be finished and ready for the consumer market, but in the meantime, Carnes and Brown hope their partnership inspires other businesses to work together in ways they hadn’t previously imagined. “We want to be an example that it can be done, that it isn’t just an experiment,” Carnes says. “When you think about competition, you just have to change your perspective. We’re competing in the same race against time, the thing that’s sitting between us and a better future. We’re not really competing with each other anymore – we’re competing with this external force. We hope more companies will think about that and [realise] that if you work together and one of you wins, then you all win.”

“Climate change is a global problem that knows no borders, will wait for no one, and will challenge everyone,” Brown adds. “It’s going to be incumbent on countries, governments, companies, and individuals to solve the problem – it’s not going to be fixed by one person. We’re all in this race together.”

Will other brands follow Adidas and Allbirds’s lead? We can only hope. Now is hardly the time for egos and pointless fixations on image and exclusivity. The climate crisis looms larger by the day, and if the past two months of Covid-19 lockdowns have taught us anything, it’s that we can achieve more by banding together.

Posted by FASHIONmode News at 7:27 AM