It all started with a cup of tea. Specifically, Earl Grey, and the impossible task of sourcing honey in the V&A’s refreshment rooms. “We have beehives on the roof, and yet there’s still no honey!” exclaims Susanna Brown, curator of photographs at the V&A, when pressed to recount her 2015 ideas meeting with Tim Walker. Despite the lack of sweetener, the myriad and magical cogs of the immersive exhibition, Tim Walker: Wonderful Things – the largest collection of the British photographer’s work to date – fell into place.

The V&A’s rooftops would become just one aspect of the museum that Walker would grow to know well, as the lensman spent months scaling the 12-acre South Kensington site, exploring miles of galleries, hidden stores, and the warren of underground Victorian passages. Along the way, he met dozens of curators and conservators, and observed thousands of inanimate objects, which, too, seemed to have personalities. Each helped inspire the 10 new photographic projects central to Wonderful Things.

“Every shoot is a total love letter to an object from the V&A, sometimes several objects,” comments Walker, whose heart swells when connecting with an object, like it would with a new best friend. From an exquisite embroidered casket created by an anonymous young woman in the 17th century to Aubrey Beardsley’s erotic illustrations, a 65-metre-long photograph of the Bayeux Tapestry and an illuminated manuscript made in the 1470s for the Duchess of Brittany, the works Walker chose span the breadth of the V&A’s 145 public galleries and beyond. “My imagination [went] off in all sorts of directions and then I [was] really in love,” Walker continues. “It [was] a total firework display. It [was] a supernova of creative explosions that you want to get down.” 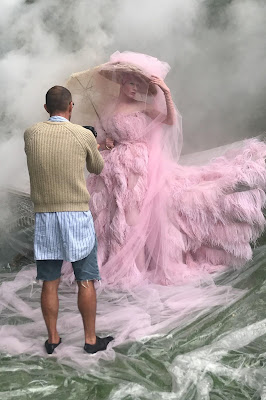 Helping Walker harness his creative energy into a body of work was long-time collaborator Shona Heath, whose spectacular sets, in turn, influenced the exhibition design. The first room is dedicated to the disparate references that have informed portraits of Walker’s previous subjects, including Sir David Attenborough, David Hockney, Cate Blanchett, Grayson Perry, Kate Moss, and friends Karen Elson and Tilda Swinton, who also appear in the new pictures later on. Heath was keen for the opening gallery not to feel like a retrospective, but simply, a “fast forward of Tim’s timeline”, she tells Vogue during a preview. The gleaming white, almost clinical space, was chosen so as not to overpower the imagery, but droplets oozing down the walls indicate a playfulness to come. “I thought it would be fun if the room appeared to to be melting,” smiles Heath. “It was just a little visual joke that I fancied making.” A fetishistic pink rubber curtain invites visitors into a small adjoining space, called “The Chapel”, featuring Walker’s nudes in one space for the first time. A punchy start that readies V&A guests for what’s to come.

Wonderful Things then explodes into a fantastical exploration of Walker’s “spiritual” relationship with the contents of the museum, or what Heath and himself call the “palace” and “sacred space”. The second room, “Illuminations”, evokes a burned-out cathedral comprising Renaissance treasures and Walker’s large-scale printed interpretations of them, along with his thought process. “We knew right from the beginning that Tim would write all the text,” reveals Brown. “It’s actually quite rare to give such a big voice to the artist, but it felt really important because of his intimate experience of the museum. Tim has very particular, very thoughtful turns of phrase, so it’s an extremely personal guide.”

Another room, “Lil’ Dragon”, transforms a 1745 snuffbox illustrated with a dragon into a story of two empresses walking their mystical creature-cum-pet at night, and picking a flower that only blooms at full moon. It is the first time Walker and Heath used UV lighting to realise their whimsical storytelling. “On the first day, the mood on set was tense, because it was such a new challenge – you’re almost blind when shooting,” explains Heath. “We started off safe, and by the end everyone was covered in UV powder” – including Brown, who delighted at watching from the sidelines and learnt the intricacies of the duo’s language. “Chocolate,” Brown discovered, was code for Walker and Heath deciding that a concept had taken on Willy Wonka-like proportions.

Onwards to “Cloud Nine”, which expands Walker’s British Vogue “Jamaican Rhapsody” shoot, inspired by the V&A’s 16th-century Indian paintings and ivory carvings of animals, and celebrates Britain’s multiculturalism. When the models, including Radhika Nair, Chawntell Kulkarni and Kiran Kandola, saw the V&A images printed on aluminium to accent the shine and texture of the fashion and beauty, they cried. Like Walker, they had found the experience to be emotional. 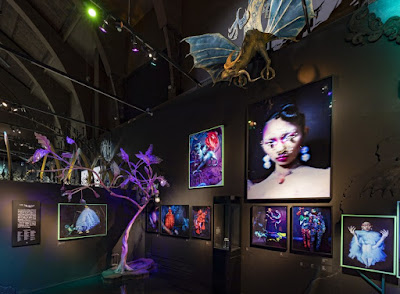 “Tim chose to represent individuals, not superstars,” says Brown of the some 100 collaborators who are each name-checked in Walker’s text. “There’s an amazing cross-section of society”, from the first transgender icon April Ashley to Gwen Franklin, who made Vivien Leigh’s wig to play Blanche DuBois in A Streetcar Named Desire. When the V&A acquired the hair piece two years ago, the conservators invited Franklin, who is now in her eighties, to revitalise the ‘do. “Tim was absolutely fascinated by the lengths that the museum goes to for objects that need care,” notes Brown. The gesture inspired the “Handle With Care” section, honouring the painstaking work that goes on behind the scenes at the storied institution. “Some V&A conservators might lavish more than 300 hours of attention onto a single garment that doesn’t belong to them, but to everybody. In our commercially driven, consumer culture, the idea of doing something for the love of wonderful things really touched him.”

The exhibition closes on a blown-up picture of a paper doll from the V&A’s Museum of Childhood, which reminded Walker of Hans Christian Andersen’s story, The Steadfast Tin Soldier. Walker rewrote the tale of a soldier falling for a ballerina into a ballet featuring a knight as the protagonist’s love interest. Video footage of the dance, performed by Harry Alexander and Jordan Robson, and narrated by Gwendoline Christie, is screened outside galleries 38 and 38a, and in the V&A’s Photography Centre to continue the journey of Wonderful Things. “The museum started life in the 1850s as a school for artists with a collection of objects that informed their learning,” contextualises Brown. “It’s why our collections – now including Tim’s landmark solo exhibition – still exist: to inspire the next generation.” How truly wonderful.

Tim Walker: Wonderful Things runs from 21 September 2019 to 8 March 2020. Tickets cost £15 and are available to purchase at Vam.ac.uk/exhibitions/tim-walker
Posted by FASHIONmode News at 6:25 PM