News just in from the Fenty empire! While the wheels are in motion for Rihanna’s second Savage X Fenty lingerie spectacular during New York Fashion Week, the musician-turned-mogul has been shooting her latest Fenty fashion drop in south London.

The campaign imagery for Release 8-19, which is available to purchase on Fenty.com from August 28, is set in Peckham. The brainchild of Ghanaian-Russian photographer Liz Johnson Artur and former Vogue Italia creative director Giovanni Bianco, five Fenty models – Nayara Oliveira, Yerim Ko, Nafisah Zia Zohra, Max and Katharina – scope out the nightlife in SW15. From roaming around the arcades off Rye Lane, power walking through the train station arches and frequenting the nearby parks, it’s a fabulously high fashion yet lo-fi approach to showing off Rihanna’s latest wares – without relying on her to always be the poster girl.

The latest edit steers the Fenty customer towards tailoring and outerwear with a strong emphasis on layering. The statement shield sunglasses and bold architectural jewellery in polished gold with crystal pavé have been replaced with sports shades and simple hoops, for styling that leans on streetwear more heavily than before. “There is a huge diversity in the collection, because that’s my style,” Rihanna told Vogue upon the brand’s launch in May. “I’m all over the place, in sweats one day and a dress the next.” It’s a catch-all design process she hopes will attract men, too. 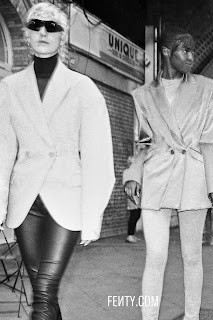 The quality of the hoodies and blazers, alike, is never compromised – even the campaign notes reference “shameless extravagance”. “We’re using the best fabrics I’ve ever encountered; everything is so well made,” she explained. “We want to make something that someone can have forever. I know what’s gone into the making of every single piece.” The stiletto boots, too, are built to last – no matter how wild a London night out becomes – because the self-professed bad gal has road tested them herself. “If I can’t wear my stuff then it just won’t work,” she said.

Could the UK-centric imagery bring the travelling Fenty pop-up shop to London? With LVMH’s financial backing, Rihanna has already staged the ephemeral boutique concept in Paris and New York, so it seems plausible that London could be next for ribbon cutting and countless fan selfies. Watch this space – and her Instagram account, where Sainsbury’s bags are giving the game away that she’s hiding out in the capital.
Posted by FASHIONmode News at 5:26 PM