When pictures emerged of Katie Holmes hailing a taxi wearing a barley-coloured cashmere Khaite bra and cardigan set in SoHo, social media stopped. Regramming of the sexy-cosy twinset commenced until the actor and her knitwear became a phenomenon in their own right.

“I live for an exposed bra,” one Vogue staffer text another. And apparently, so did the rest of the fashion industry. Khaite’s “Eda” bralet, which retails for $520 (£427), sold out within an hour. The “Scarlet” cardigan, costing $1,540 (£1,265), which the New York-based brand says “envelops the body in mid-weight cashmere selected for its exceptional softness and robust texture” is still available to purchase. But, as Holmes proved, it’s all about the double dose of butter-soft wool. 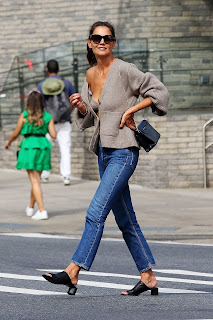 Nothing about the look was insouciant or off-the-cuff as the photos suggest. From Holmes’s milk chocolate nail varnish to complement the husk-hued sweater, to her messy ponytail to enable maximum shoulder exposure and the fastening of just one tortoiseshell button, it was a lesson in artful autumn-appropriate styling as the seasons are about to shift.


Khaite creative director Catherine Holstein, who founded the brand in 2016, said it was “obvious” why the two-piece had received an overwhelmingly positive response. “I want everything in cashmere,” she told The Cut. “I want a cashmere house. Why not a bra?” Khaite has been fashioning woollen bras, which Holstein says are surprisingly stretchy and supportive for different cup sizes, for two years. But now, thanks to Holmes, who shall henceforth be known as a cashmere bra influencer, they will be everywhere on street stylers during the upcoming show season.

Posted by FASHIONmode News at 5:28 PM