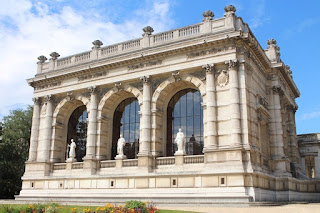 A legendary Parisian fashion museum, the Palais Galliera is housed in the palace of the Duchess of Galliera, who in 1978 decided to build a museum that could host the collections of art she envisaged coming to the Paris scene. Architect Léon Ginain helmed the project and in 1894, the building officially opened its doors in the 16th arrondissement. However, it was only in 1977 that the Palais Galliera became the fashion museum in Paris and worldwide, thanks to exhibitions such as Alaïa, Dalida, Les Années 50 and Margiela-Galliera 1988-2018. Currently closed for renovation, the museum will reopen its doors at the end of 2019, with new permanent exhibition spaces baptized The Gabrielle Chanel Rooms, made possible by an exclusive partnership between Chanel and the museum. The institution will shed light on collections, tracing the history of fashion since the 18th century, in the underground tunnel spaces sponsored by the Parisian fashion house. Spanning 7,200 square feet and designed by architect Dominique Brard, Palais Galliera, currently under the command of Miren Arzalluz will become the only permanent fashion museum in France.

The Museum of Decorative Arts 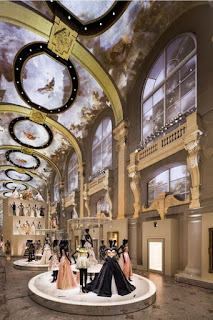 Initially opening in 1905, in a wing of the Marsan du Palais of the Louvre, the Museum of Decorative Arts was designed by Gaston Redon, and houses a monumental collection of decorative arts and design pieces. Its archive of over 150,000 fashion pieces has been donated by the likes of Paul Poiret, Madeleine Vionnet, Elsa Schiaparelli, Cristóbal Balenciaga and Christian Lacroix dating from the 8th century to the modern day. Christian Dior’s iconic tailor bar and the way it sculpted the New Look in 1947 is paid particular attention to. With exceptional exhibitions, such as Dries van Noten and Tenue correcte exigée! and the prominent Christian Dior, Designer of Dreams exhibition in 2017 for the 70th birthday of the French fashion house, which drew over 700,000 guests from around the world, a record for the museum. 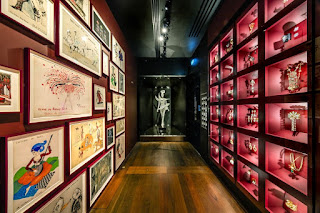 On October 3, 2017, the Yves Saint Laurent Museum in Paris opened its doors on 5 Avenue Marceau, inside a hôtel particulier, housing the Fondation Pierre Bergé – Yves Saint Laurent. The space spans almost 5,000 square feet, with a retrospective collection of 50 designs, sketches, photographs and videos, as well as hosting thematic exhibitions. The highlight of the visit is surely the ancient couture rooms and Yves Saint Laurent’s studio, a vivid flashback to the origins of the Parisian fashion house, founded in July 1961. Nathalie Crinière is responsible for the set design, with Jacques Grange behind the décor, both faithful collaborators of the foundation. The Jean-Michel Rousseau architect agency designed the space capable of immersing visitors in the original atmosphere of the fashion house, the resident exhibition L'Asie rêvée d'Yves Saint Laurent travelling to Nice in April. The exhibition to see in 2019? Yves Saint Laurent’s collections on display, including the Mondrian dresses. 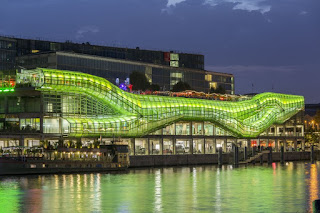 A glassy green snake by Jakob + Macfarlane hangs suspended above the Seine. The Cité de la Mode et du Design draws the gaze of all those wondering along the Paris's riverbanks. Housed in a former industrial warehouse in Port de Paris, built in 1907, the building sees fashion fanatics from the capital's 13th arrondissement pouring through its doors, especially on fine days - the rooftop view has a magnetic effect. But the ephemeral exhibitions are the main draw, devoted to artists and designers alike, often playing them off against the designs of students from the IFM, voted the best fashion school in France in 2015, an important reference point for almost 30 years for young people wanting to break into managment, communications and fashion design. 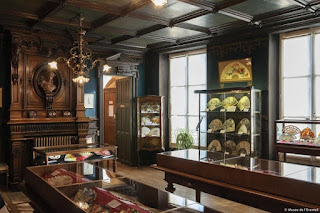 The first of its kind, the Atelier Anne Hoguet - Musée de l’Éventail is dedicated to the sleek accessory. Since 1993, 2500 pieces dating from between the 16th and 20th centuries are found in the museum’s halls. The interior is simply sublime, with a giant chimney, walls draped in blue tapestries, embroidered gold threaded lilies. The fans, some of which hark from the Hoguet collection, are set beside fan-makers’ tools, responsible for adorning them in silks, organza, lace and feathers. A visit to this museum is almost poetic, revealing the rarest of fabrics and finest materials.

Posted by FASHIONmode News at 7:19 PM