Gucci has announced the hire of its first global head of diversity, equity and inclusion. Renée Tirado, who previously held the position of the chief diversity and inclusion officer at Major League Baseball, “will help create the meaningful change” the brand wants to see in the company – and the fashion industry.

Tirado will be tasked with helping to implement a global strategy to make the brand’s workplace more inclusive along with its business practices, too. “I am in the business of making human connections that start with the foundations of inclusivity, respect, and diversity to ensure Gucci remains culturally relevant and economically competitive,” said Tirado in a statement. “Diversity is on the agenda of many companies, but Gucci has now assumed a leadership role in the industry through the breadth of initiatives it is undertaking and the prioritisation it has placed on it as a part of the overall business.”

Other household-name brands, including Chanel and Burberry, are recruiting for similar positions, while Prada launched a Diversity and Inclusion Advisory Council, aiming to “amplify voices of colour within the industry”, in February.

“Since 2015, Alessandro and I have worked to put culture – self-expression and inclusivity – at the centre of what we do. I strongly believe diversity empowers creativity. All that we have accomplished has been driven by these values,” said Marco Bizzarri, the brand’s president and CEO. “This appointment is a fundamental building block to further our commitment and support the initiatives already in place. As a learning organisation, we have challenged ourselves over the last few months to accelerate our vision to develop a stronger organisation.” 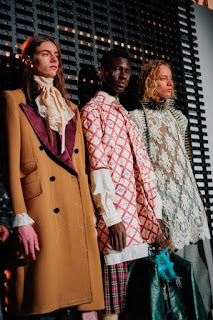 Earlier this year, Gucci Changemakers, a global programme and scholarship fund, was created to provide “more opportunities for talented young people of diverse backgrounds”. The brand has also established a council – made up of familiar faces in the industry such as Cleo Wade, Dapper Dan and Will.i.am – to ensure transparency, accountability and the long-term impact of the programme. Tirado will join the line-up, too.

This industry-wide effort to close the inclusion gap follows high-profile cases of brands being called out for products deemed to be culturally inappropriate. Gucci, for example, was accused of portraying blackface in a balaclava polo neck featuring red lips that was part of its autumn/winter 2018 collection. The item was immediately dropped.

“It’s been very intense to go through, and it must serve to build something new,” Gucci creative director Alessandro Michele told Vogue in February. “We were, of course, very sorry. This will help us do things in a different way. We’ll learn a lesson, that we all need to open up and allow other people to bring something into this company. Something beautiful has come out of this. This will have a strong impact on the work carried out by this house.”