If Charlie Brooker enlisted Miuccia Prada to consult on an episode of Black Mirror, it might look a little like Nylon Farm, the new episodic film project from the brand.

Presented in four chapters, part one introduces the futuristic farm and its population of black nylon sheep – a nod to Philip K. Dick’s science fiction novel Do Androids Dream of Electric Sheep? The fleece of these cyborg mammals is harvested via alternate reality technology and automated machinery, and woven into Prada’s signature nylon. But within this IT-supervised system, human emotion emerges and a love story unfolds. 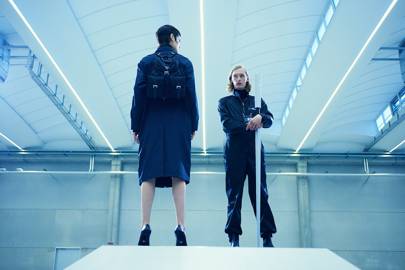 The series, which is filmed at the company’s industrial headquarters in Valvigna, Tuscany, is not a comment on the company’s plans to utilise artificial intelligence, but symbolises its way of looking forward while respecting the brand’s history. When Mrs Prada introduced her industrial nylon backpack in 1984, she sourced the durable fabric from factories making parachutes for the military. Her quest for newness is mirrored in the technological innovation and conceptual advancements in the film’s ultra-slick universe.

Watch the story unfold on June 1, 4 and 9, when the next three episodes are unveiled on the brand’s social media. Just don't forget to "follow the protocol", as Prada's new sci-fi Instagram voice advises.

Posted by FASHIONmode News at 1:25 PM