Edward, Naomi And Kate Collaborate With Adidas For London Pride

Fat Tony (real name Tony Marnach) might be best known for his adept skills on the decks, but, for his latest project, the DJ has dipped a toe in the fashion pool. In support of London Pride, he has brought together a roll-call of LGBTQ+ supporters to reimagine the Adidas Samba trainer.

Vogue editor-in-chief Edward Enninful, contributing editors Kate Moss and Naomi Campbell, Elton John, Pharrell Williams, Marc Jacobs, David Beckham, Skin and Amanda Lepore were all given the theme “prouder” to makeover a pair of Sambas, the soccer shoes that were first released by the sporting brand in the 1950s.

“I have been involved in activities around London Pride in some shape or form since the late 1980s,” Manarch said of taking on the role of campaign curator. “I wanted to create something with Adidas that really spoke to where we are today by envisaging a new notion of pride as being one with no labels; and how we as a community alongside our allies can push things further still.”

Each creator’s shoes will go on display in a free exhibition at the HENI Gallery in Soho during London Pride Week from July 4 to 10. An eBay auction will also take place on July 3 to aid the work of the Albert Kennedy Trust, which provides safety and support to members of the LGBTQ+ community who are facing homelessness. 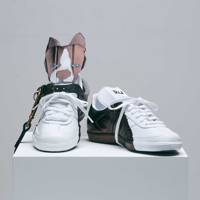 “In an age where so many freedoms have been won and LGBTQ+ culture can feel so prevalent, I wanted to work with Adidas to draw attention to the issues still facing LGBTQ+ youth in 2018,” Manarch said of the importance of the work done by the charity.

The participants' call to support the LGBTQ+ community will be documented in a short film by Nick Knight’s SHOWstudio, with Knight commenting that “in these times, it is even more crucial to be original and to have pride in who you are and what you do.” The footage will be shown alongside a musical accompaniment and performance from a live Samba band during the London Pride parade, where Adidas will sponsor its first float. An invite-only after-party will be hosted at The Groucho Club in Soho, with Fat Tony taking a turn on the decks, of course.

Posted by FASHIONmode News at 3:19 PM